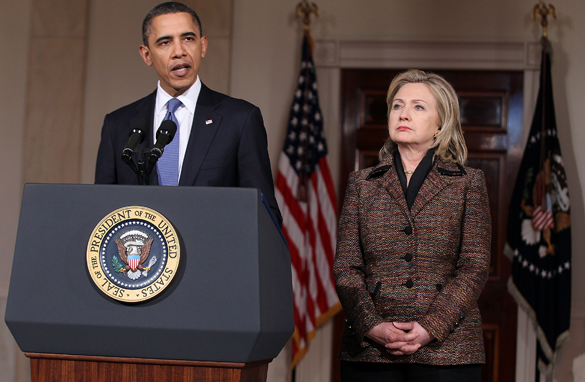 Mark:
Without a doubt, Hillary Clinton. Unfortunately, she cannot get that far ahead of the White House message, and even worse, the White House hasn't yet made up their mind. Too bad we don't have an adult in the White House as we do at the State Department.

Ram in San Jose, California:
Absolutely the stronger and more resolute voice consistently has been Hillary Clinton who warned presciently in Doha that the foundations of progress in the Middle East are 'sinking into the sand,' and that the region faces disaster without real reforms. Events starting with Tunisia to Egypt have proven her wisdom right.

Rich in Texas:
Neither. Talk is cheap, Jack. Both Obama and Clinton can talk until they are blue in the face and the result will be the same. People in Libya will still die. Giving lip service to the media only builds a stronger case for replacement in the next presidential election.

Jenny in Nanuet, New York:
They're both doing what's appropriate for their positions in the administration. Together, they're playing it perfectly as to not stoke anti-Americanism.

Anthony:
I'm not a big fan of Clinton, but I think she is a stronger voice on many issues than Obama. Obama has not demonstrated the leadership skills or his professed leadership skills since his campaign. The United States is the greatest nation in the world and we deserve a great leader which we surely do not have at this time.

Cal in Norwalk, Ohio:
Easy. Neither one.

Dawn:
Who knows whose voice is stronger? While we talk, talk, talk, the brave people of Libya are dying. For God's sake, level the playing field with a "no fly zone." Give them a chance.

Kirk in Apple Valley, Minnesota:
Who cares? I'm tired of hearing about Libya. What are we going to do about it anyway? Invade?