Should President Obama stay out of Wisconsin's budget battles? 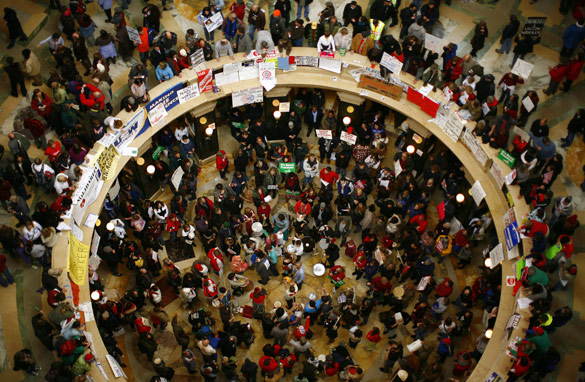 The showdown in Wisconsin over Governor Scott Walker's proposal to restrict the collective bargaining rights of public sector unions as a way of dealing with the state's budget deficit has put President Obama in a tough spot.

He doesn't want it to appear that he's turned his back on public sector unions. After all, their support helped him win the presidency in 2008.

But at the same time, his federal government is staring at deficits the likes of which we've never seen before, and there is no sign he or the Congress are about to do anything meaningful to address them.

Last week, the president told a Milwaukee television station: "Everybody's got to make some adjustments to new fiscal realities" but then later added the proposed cuts seem "more like an assault on unions."

That second part got under some Republicans' collars.

Republican Senator Lindsey Graham called the comment "inappropriate" and said the President should focus on what's happening in Washington, not Wisconsin.

And Wisconsin's unions likely won't be the last to be targeted for cuts. A new government report finds that combined federal, state and local government debt now exceeds the size of our entire economy. Ohio and Florida also have new Republican governors who are trying to make deep cuts to balance their budgets, and many other states are facing tough decisions, as well.

Here’s my question to you: Should President Obama stay out of Wisconsin's budget battles?

END_OF_DOCUMENT_TOKEN_TO_BE_REPLACED

Does Sarah Palin care more about her image than the issues?

A disgruntled former aide to Sarah Palin has written a scathing political tell-all in which he suggests she is more concerned with her image than she is about the issues. Shocking.
[cnn-photo-caption image=http://i2.cdn.turner.com/cnn/2011/images/02/22/art.palin.jpg caption=""]
Former aide Frank Bailey, who joined Palin's political team during her 2006 gubernatorial campaign and stayed on through her resignation in 2009, based his memoir around some 60,000 e-mails he sent to or received from Palin during that time.The book was leaked to several media outlets in Alaska and Washington over the weekend.

Among the claims in the book:

Palin allegedly sent phony letters to the editor when she was running for Alaska governor, supporting herself but signed with fake names. She allegedly rigged her staff's computers so they could unfairly influence an Anchorage new station's online poll about her refusal of federal stimulus dollars. And, according to Bailey, Palin refused to appear on any network other than Fox News, referring to the rest as "the bad guys."

Also in the book, Bailey claims that just months after the McCain-Palin ticket lost the presidential race, then-governor Palin seemed focused more on her national image than on what was going on in the state of Alaska, telling Bailey and another colleague in a Spring 2009 e-mail: "I hate this damn job."

Bailey has reportedly been shopping around the book since fall 2009 and has yet to sell it to a publisher.

There's been no response from the former governor on the book, but a spokesman for Palin's PAC told the Anchorage Daily News she did not expect Palin would have anything to say about "this kind of untruth."

Here’s my question to you: Does Sarah Palin care more about her image than the issues?