Mubarak forced out now instead of September? 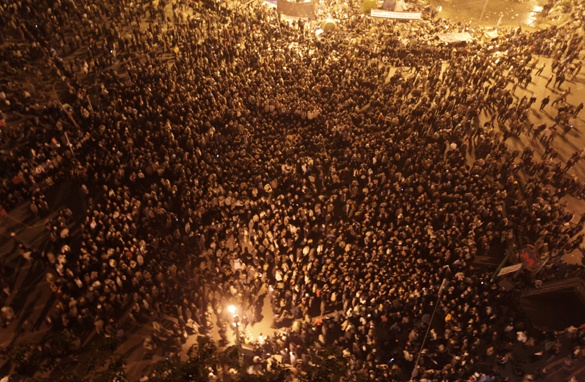 The Egyptian people are not buying what Hosni Mubarak is selling.

In fact, the anti-government protesters have only become more emboldened since Mubarak's announcement that he'll step down from the presidency - but not until September.

But they want him gone now. They think 30 years is long enough.

However, that doesn't seem to matter much to Mubarak.

He told ABC's Christiane Amanpour that he's sick of being president and would like to leave office now. But he says he can't for fear of the country slipping into chaos. That's as opposed to what we're seeing in the streets of Cairo right now.

As for the people shouting insults at him, Mubarak says, "I don't care what people say about me. Right now I care about my country, I care about Egypt."

Earlier this week, President Obama seemed to suggest Mubarak step down sooner rather than later, saying an orderly transition to a new regime "must begin now."

U.S. officials say the protest movement isn't going away - it's only getting bigger. They worry that the longer the crisis goes on without a resolution, the worse the economic impact and violence will become. Already there are food and fuel shortages and bank closures.

Other world leaders have also called on Mubarak to step aside, including Turkey's prime minister, who says Mubarak should "satisfy the people's desire for change" without hesitation.

Others are suggesting an interim "caretaker government" that could oversee the upcoming elections.

Here’s my question to you: Should Mubarak be forced out now rather than waiting until his term expires in September?

Ralph in Orange Park, Florida writes:
There is no guarantee that Mubarak would yield power in September, no matter what he says now. It would just give him more time to rig the elections and determine his own successor.

Ahmed in Charlotte, North Carolina writes:
The entire world is watching Mubarak's evil tactics right now... Egypt wants to catch up with the rest of the civilized world. We want our honest, intelligent and capable men and women from all walks of life to stand up and represent their country in fair elections. We can make the world proud of us. But it all begins today by throwing Mubarak out!

Abdelrahman in Cairo, Egypt writes:
No, Mubarak should stay to the end of his term. Not because I like him, but for the stability now. He can't reverse the change now. But we need stability to prevent other groups from harm Egypt more.

Jerry in Salem, Oregon writes:
Jack, Now that Mubarak's goon squads have resorted to attacks and detainment of prominent world journalists while reporting in Egypt, he should be forced out now - as in "yesterday". I'm afraid he is planning something seriously brutal as he attempts to throw sand in the eyes of the world.

Dianne writes:
He should go now. He is undeniably the cause of the "chaos" he decries. Also, someone needs to remind him that the same U.S. technology that can put a smart bomb down a tiny chimney in Iraq can also see Tahrir Square in full detail, even in the dark. He really can't hide the abuse of his own countrymen, regardless of whether or not the press is there.

David writes:
Hi Jack. How much money would it take for you to leave CNN today rather than at the end of your contract? It's estimated the Mubarak family's net worth is between $40 billion and $70 billion. Go figure! Guess it's $1.5 billion from the US for 20 years.