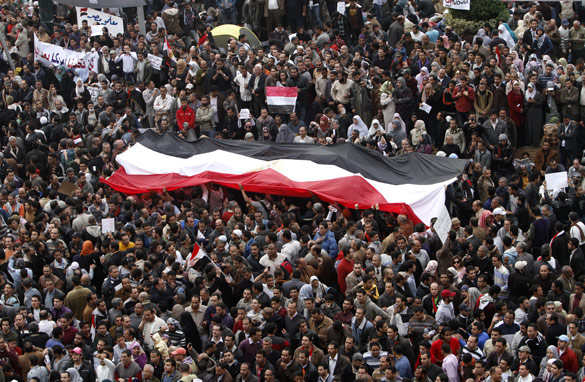 As Egyptian protesters demanding reform fill the streets by the hundreds of thousands, it's worth remembering that the U.S. helps control the purse strings in that country.

American taxpayers give $1.5 billion dollars a year in foreign aid to Egypt, second only to Israel.

Although the White House has said it's reviewing this aid depending on the military's behavior - One top Republican says now is not the time to threaten to withhold any of this money.

Congresswoman Kay Granger - who chairs the house subcommittee in charge of foreign aid - says we shouldn't use the money as a stick to force Mubarak into reforms.

Granger says most of the $1.5 billion goes toward the military - which seems to be a stabilizing force among the demonstrators.

Granger says Congress should only consider withholding aid if there's evidence that U.S. military equipment is being used improperly.

Several top Democrats are on the same page, saying the U.S. should remain committed to assisting Egypt. They point to the close relationship between the two countries.

Nonetheless, some experts think cutting financial aid is the best way to get results.

A bipartisan group of former officials says the administration should suspend all aid to Egypt until the government:

Agrees to elections as soon as possible, allows banned candidates to run, immediately lifts the state of emergency that's been in place for decades, releases political prisoners, and allows for freedom of the media and assembly.

Here’s my question to you: Should the U.S. withhold any of its $1.5 billion in financial aid to Egypt?

Deaddin in Cupertino, California writes:
Jack, As an American (from Egyptian descent), I think that the U.S. should withhold all aid until elections are called - elections that are inclusive of all parties and all candidates interested in running. By withholding aid, you will see the fastest results.

Michael in New Mexico writes:
No. We have to honor our treaties and other agreements with Egypt. We need to use their airspace and the Suez Canal to have access to trade and tourism. What is the cost of peaceful relations? $1.5 billion in financial aid is a bargain for what we get. And, considering that Egypt uses that money to buy military equipment from us, it really isn't aid at all.

Karen in Missouri writes:
Living in Egypt for four years as an American and being a part of an Egyptian family and culture, I know Egyptians view any support given to Egypt and its people as a positive reflection upon the U.S. To take away aid would be regarded as a lack of direct support to the people and Egypt. To use aid as a punishment would only hurt the people and our image in the Egypt that they regard so highly.

Mike writes:
As sports, hamburger and fries are a given in our country, 'bartering' is as strong in most if not all Middle East countries. The art of the deal is manifest in all negotiations, especially in Mideast politics. Puting pressure on the military's income stream will transfer up the 'political' chain from the Egyptian military leadership to Mubarak. It will ultimately define who really has the power in Egypt. Their military is more likely to make a better 'deal' with Mubarak then any U.S. attempt to reason a new paradigm. We need to learn how to play their brand of hard-ball in which friendship takes a side seat when 'push' needs to become 'shove'.

Paul in Florida writes:
Stop foreign aid altogether. Please show me the logic in paying out huge sums to anyone when the U.S. is broke and has to borrow the money. Absolute madness.