What's behind America's surge in optimism? 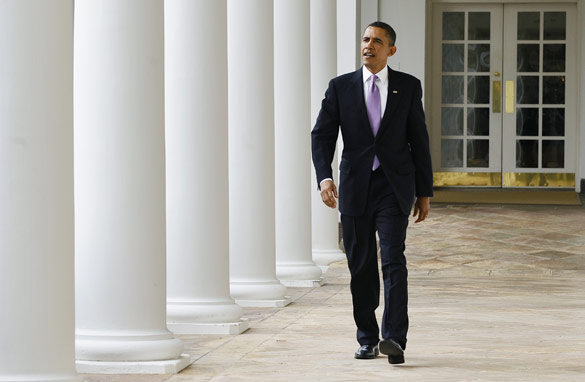 President Barack Obama walks along the colonnade from the Oval Office this morning. He is set to deliver his State of the Union address tonight at 9 p.m. ET. (PHOTO CREDIT: JEWEL SAMAD/AFP/Getty Images)

As President Obama gets ready to deliver his State of the Union address in just a few hours, a new poll shows Americans are feeling better about the state of that union than they have in almost four years.

The CNN/Opinion Research Corporation poll shows 43 percent of those surveyed say things are going well in the U.S. - that's up 14 points in just a month.

A majority - 56 percent - still say things are going badly. But that number is down sharply from 71 percent last month.

The poll shows college graduates and people in the Midwest are most optimistic. Also, urban and suburban Americans seem more optimistic than those in rural areas.

There's a partisan divide here too - with Democrats and Independents more likely to say things are going well than Republicans.

So why the sharp increase and why now?

Experts say part of the reason is the public's growing optimism about the economy.

But there are non-economic reasons at play here as well:

People are often more optimistic at the start of a new year. Other factors could include:Tthe more civil tone in political debate since the Tucson shootings, the fact that there wasn't a terror attack over the holidays, and the perception that the lame duck Congress actually accomplished some things in December.

Whatever the reason, we'll take it. And the rise in optimism means the president should be playing to a friendlier crowd tonight.

Here’s my question to you: What's behind America's surge in optimism?

Ernie in Charlotte, North Carolina writes:
We're not so much optimistic as realistic. We all know that the Congress, the president et al will accomplish nothing; we're exhausted by the talk and have moved onto other things. We've come to accept a "new normal" of 9% unemployment, no health care, higher costs and taxes. More people have more passion about the Steelers versus the Packers coming up in a couple of weeks than about the State of the Union.

Paulette in Dallas, Pennsylvania writes:
I'm not buying it. Give it time. The other shoe will drop.

Sylvia in San Diego writes:
Nothing, get real! The people that were polled must work and live in Washington where all the jobs were created. The pollsters need to poll people in the big cities where the unemployment is over 10%. See how much optimism they will find there.

S.T. in Virginia writes:
Jack, Contributing to the surge in optimism is the rebound of the auto industry and better than expected results reported by companies such as Apple.

Ron writes:
Who in the world is optimistic? Not me.

Jerry in Toronto writes:
False hope, Jack. Sorry to have to say that, but it's the same old spin from political leaders that have raised people's optimism. The reality is America still has tough times ahead. Its debt is too high (and growing) and jobs are still flowing like water overseas. Nobody has put a cork in the bottle yet. Until America gets its ducks in a row this optimism will be short lived.

Greg in Texas writes:
Why all the optimism? Not a clue. However, since we are all feeling warm and fuzzy sitting together and such, maybe the Tea Party can join with the Green Party to form the Green Tea Party. They would be fiscally conservative, recycle and be healthier.