Ready for start of 2012 presidential campaign?

And that means another presidential campaign is already under way. That's unfortunate, but we really don't have a choice.
[cnn-photo-caption image=http://i2.cdn.turner.com/cnn/2011/images/01/20/art.2012.campaign.jpg caption=""]
Potential Republican challengers to President Obama are popping up everywhere.

You can spot them in the early voting states - like New Hampshire, Iowa and South Carolina; and you can hear them weighing in on national debates, like raising the federal debt limit. What makes it worse is a lot of them are the same bunch we were subjected to last time around.

Former Arkansas Governor Mike Huckabee is all over the place promoting his new book, and former Massachusetts Governor Mitt Romney just returned from a week-long trip to Afghanistan and the Middle East - gotta beef up those foreign policy credentials. The country's been there and done that with Romney and Huckabee.

Others are hinting they may be interested - including Donald Trump. He does that every four years.

One strategist tells Politico the potential candidates "are like bubbles in a shaken bottle of champagne. They are anxious and ready to pop."

A couple of new polls suggest Huckabee, Romney and Sarah Palin are still at the top of the Republican pack with Newt Gingrich, New Jersey Governor Chris Christie and Congressman Ron Paul bringing up the rear.

On the other side, the Democratic National Committee announced today that President Obama's re-election campaign will be based in Chicago starting in March or April. Here we go again.

Here's my question to you: Are you ready for the start of the 2012 presidential campaign?

END_OF_DOCUMENT_TOKEN_TO_BE_REPLACED

More than half the states fight health care law in court 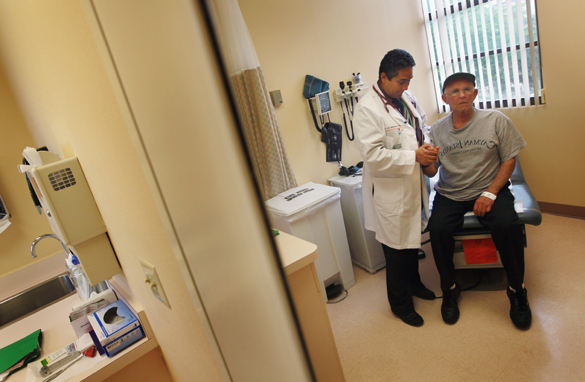 It may be the law of the land, but there are a lot of people who want to get rid of health care reform.

The bill is unlikely to see the light of day in the Senate... and if it ever makes it to President Obama's desk, he'll veto it. Republicans acknowledge repeal is highly unlikely - so they may try to cut funding for parts of the law or eliminate specific provisions.

It's not just house Republicans who are against the health care reform law. Not by a long shot.

More than half the states in the union are challenging the law in court. Another six states have now joined a Florida lawsuit, bringing the total in that suit to 26 states. Plus, Virginia has filed a separate lawsuit; and Oklahoma says it will do the same.

The states insist the law is unconstitutional because it forces people to buy health insurance. They might be right.

A Thomson Reuters poll shows that an overwhelming 65 percent of doctors say health care reform will mean worse care for patients over the next five years. Only 18 percent think the new law will mean better care. Those are pretty stunning numbers - better than three to one - and these are doctors.

Finally, most of the American people are not sold on this thing either. A recent CNN/Opinion Research Corporation poll shows 50% want the new law repealed. Only 42% would choose to keep it as is.

Here’s my question to you: What does it mean if more than half the states are fighting the new health care law in court?