It's a debate almost as old as the country itself: whether it's a good idea for private citizens to own guns.
[cnn-photo-caption image=http://i2.cdn.turner.com/cnn/2011/images/01/11/art.glock.jpg caption="A Glock 19 handgun."]
And when something like the Tucson massacre happens, the debate roars to life all over again.

It was remarkably easy for the shooter - Jared Lee Loughner - to get his hands on a gun in Arizona, which has some of the laxest gun laws in the country.

The 22-year-old passed an instant background check in a sporting goods store before purchasing a Glock 19 - a 9mm semi-automatic pistol. He also bought an oversized magazine that allowed him to fire 33 shots without reloading - instead of the standard 10. Some lawmakers want to ban these oversized magazines nationwide.

They're already outlawed in at least 6 states.

But not Arizona - where a recent law allows anyone over 21 to carry a gun without a permit. Guns are allowed almost everywhere in Arizona - including the state capitol, many public buildings, in places that serve alcohol and on school grounds.

Meanwhile, by many accounts, Loughner is being described as mentally unstable and someone who should have never been allowed to buy a weapon in the first place.

He failed the "drug screening process" for the military and was rejected. Loughner had five run-ins with his Community College police before he was kicked out of school for disruptive activity.

But instead of becoming stricter, the nation's gun laws have actually become more lax in recent years. Examples include the removal of Washington, D.C.'s handgun ban and an amendment to allow gun owners to carry concealed and loaded weapons in national parks.

Here’s my question to you: Should the Tucson tragedy be enough to change the nation's gun laws?

END_OF_DOCUMENT_TOKEN_TO_BE_REPLACED

What can Pres. Obama say in Tucson to ease the pain? 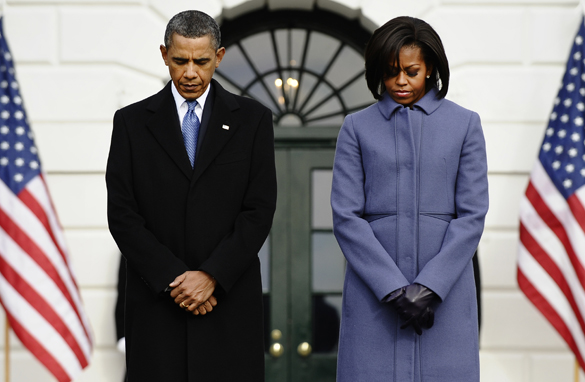 It is the nature of events that confront our leaders that often serve to define them.

In the wake of the Tucson massacre, President Obama has been given an opportunity to deliver on a promise he made long ago: to raise the level of political discourse and by so doing to unify this country.

Politico has an excellent piece on how this tragedy presents Mr. Obama the chance to elevate the nasty tone of politics; much like Bill Clinton did after the Oklahoma City bombing.

Political analysts say that the president could use this experience to help move the country to a higher moral ground.

This is a promise the president first made in his famous 2004 speech at the Democratic National Convention. And civil discourse is something he also talked about tirelessly on the campaign trail and since he's been in office.

But action speaks louder than words, and in the last two years we haven't seen much, if any, of this in Washington. In fact, the partisan divisions and heated rhetoric between the two sides are arguably worse than they've ever been.

And President Obama, at times, has been part of the problem. During the campaign, then-candidate Obama said of countering Republican attacks, "if they bring a knife to the fight, we bring a gun." And more recently, in the lead-up to the midterms, the president referred to Republicans as "enemies."

The president has called the Tucson shootings "a tragedy for the entire country." He's headed there on Wednesday. A nation increasingly weary of anger and division will be listening.

Here’s my question to you: What can President Obama say in Tucson to ease the pain?