How to tone down the hateful rhetoric? 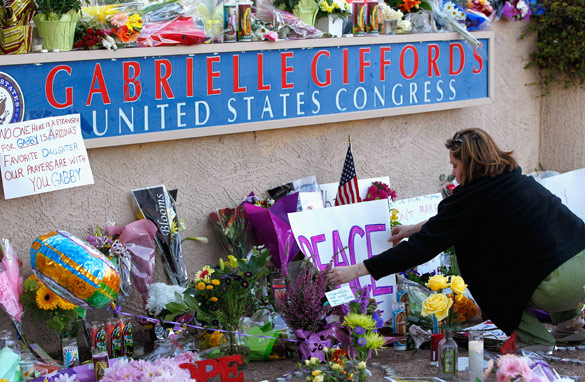 It was probably only a matter of time.

For the past two years, the political rhetoric in this country has quickly grown more hateful, angry and divisive.

We've seen guns at rallies and signs with nasty and racist slogans. And now we have the tragedy in Tucson, Arizona. Is there a link between this inflammatory rhetoric and the shooting of U.S. Rep. Gabrielle Giffords and 19 others, six of whom are dead? Bet on it.

Several lawmakers from both sides of the aisle are now calling for the political rhetoric to be toned down. They say politicians need to "cool it" and to think about "how our words affect people."

This is happening at the same time some of them are deciding to start carrying guns.

Many are pointing fingers at Sarah Palin, who makes incendiary and irresponsible comments with some regularity. Palin once tweeted concerning the health care debate, "Don't retreat, instead - RELOAD!"
She posted a map online before the midterms showing crosshairs over 20 contested Democratic districts, including Giffords'.

At the time, Giffords said, "When people do that, they've got to realize there are consequences to that action."

Since the shooting, Palin has expressed her condolences and said she hates violence.

The Tea Party movement, which has also been a cauldron of inflammatory rhetoric, is distancing itself from the tragedy, condemning what happened.

But even if there is no direct correlation here, people such as Palin could bear some indirect responsibility for the mindset of the shooter and others like him.

Here’s my question to you: What can be done to tone down the hateful rhetoric in this country?

END_OF_DOCUMENT_TOKEN_TO_BE_REPLACED

Some members of Congress to carry guns?

In light of the tragedy in Tucson and the attempted assassination of a sitting member of Congress, some lawmakers are taking matters into their own hands.
[cnn-photo-caption image=http://i2.cdn.turner.com/cnn/2011/images/01/10/art.capitol.night.jpg caption=""]
They say they plan to carry guns in public in their home districts.

Republican Congressman Jason Chaffetz of Utah tells CNN he's always had a concealed weapon license and has often carried a weapon, but says now he may "do it more regularly."

Chaffetz says he's already gotten half a dozen threats that have caused him to call the capitol police or local law enforcement - and that's after only 2 years in office.

He also thinks Congress should consider using the U.S. Marshals service to provide security for lawmakers in their districts - like they do for federal judges.

Politico reports that Democratic Congressman Heath Shuler of North Carolina also plans to carry a gun more often and increase security in his district. Shuler is even encouraging staffers to get their own permits to carry a gun. Shuler was the victim of a serious death threat a couple years back.

Other lawmakers are taking steps to tighten security in their offices. Some suggest that local law enforcement could play a larger role at events like the one where Congresswoman Giffords was shot or at town hall meetings.

But - other members of Congress say they won't change their lifestyles at all. They say they'll continue to engage their constituents and offer full access.

Here’s my question to you: What does it say about the U.S. that some members of Congress will now be carrying guns?