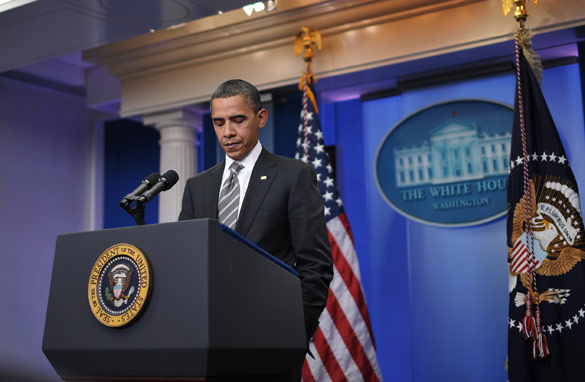 Carla writes:
It hurts his chances with this Democrat. Has anyone checked to see if the Republican Party contributed heavily to the Obama campaign? I have to ask because they're sure benefitting from his presidency. Obama would make a terrific Republican. He failed at the health care plan he promised. Now, he's helping the wealthy Republicans stay wealthy, while stomping on the poor and middle class he promised to help.

Joe writes:
No, he didn't. You know why? Because for a voter money talks, especially the money that won't be taken out for taxes after December. Let's be honest: the rich will always have money and that money will be used on tax attorneys to avoid paying taxes at full price anyway. He saved the middle class from having to pay more taxes. That will be his ace in the hole for the future.

Mar in Tampa, Florida writes:
He will never get my vote again. Hillary would have made a better president because she has more "stones" than Obama will ever have.

Dawn writes:
I hope so! Obviously, the president doesn't know anything about negotiation or compromise. Compromise is not backing down until the other side has even more than they originally wanted. Notice not one Republican is objecting to this deal? In a true compromise, some on both sides would be objecting. As a Democrat who voted for this man, I am very disappointed.

Steve writes:
If Palin wins the nomination, then I'll vote for Obama. If Romney is the candidate, then I, and many other Democrats, will stay home. Obama has minimal leadership skills. He should have stayed in the Senate and learned how politicians operate. Right now, he looks like a Class C rookie hitting against Sandy Koufax.

John writes:
I think that two years is a long time. His hands were tied on this one. What will matter for the president is the economy (jobs). I believe the American people need to "believe versus hope". In short, investments to create new jobs will come when corporations and businesses "believe" the economy is back on solid ground. Not a good idea to bet on "hope".

Eden writes:
I've been a big supporter of Obama, but now even I'm feeling exasperated with him. He needs to man up and stop being so willing to compromise. He's like the lawyer who settles every case so he won't ever have to go to trial.