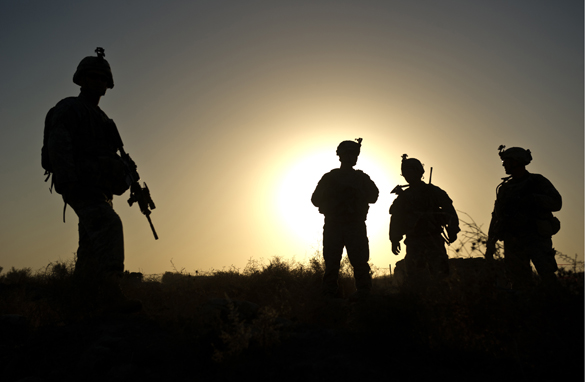 Larry writes:
Our Congress should visit Walter Reed or Brooke Army Medical to see our wounded warriors fight to reclaim their lives. Many other warriors suffer less visible wounds with tortured memories of their ordeal. The tax money the Republicans chose to direct toward the wealthy would have nicely assisted these heroes and their families. I suppose the GOP considers it more important to help the rich upgrade their Lexus than help a soldier buy a mini-van.

Ed in Texas writes:
A soldier in Iraq carries 45 pounds of gear in 119 degree heat and has seconds to determine if the car speeding towards him carries an expectant mother to the hospital or a suicide bomber. For that, he gets a 1.4 to 1.9% pay raise? A Wall Street banker's bad bets are covered by the U. S. taxpayer and he gets a million dollar bonus? The concept of "risk/reward" has been turned on its head.

KJ writes:
Active duty here. I am willing to forgo a pay raise to help the country. Yes, I know we are fighting two wars, but for those of us who deploy, we get additional pay for this effort, sometimes up to 50% of our pay.

Alex writes:
As a veteran, I hate to say it, but pay raises for the military are tied to inflation. And, with the poor economy inflation is only a bit over one percent so a 1.5% raise is correct. The only reason the millionaire tax cuts look like they will be extended is because the Republicans ended the extension of unemployment insurance this month just in time for Christmas and refused to move on ANYTHING until they got their way.

Jo writes:
No, sir. It is a big joke and slap in the face. I don't know anyone personally in the military. I'm American Muslim (non-practicing) and I think this is ridiculous. Our country is prioritizing all the wrong things and it is continuing to get worse.

Carol writes:
Jack, It is unbelievable. My son is currently on his 6th deployment. He was in the initial invasion, 2 more trips to Iraq, and now the 3rd to Afghanistan. He got out of the Marines after his first hitch, but could not find work, so he re-upped for four more years. Talk about tough choices: jobless or target. And now 1.9% increase. What an insult.