President Obama's deficit commission may be dead on arrival.
[cnn-photo-caption image=http://i2.cdn.turner.com/cnn/2010/images/11/29/art.disappointed.obama.jpg caption=""]
Apparently the differences among members are so great that the toothless, bipartisan commission canceled its last scheduled meeting tomorrow. Instead, they'll meet one-on-one and try to twist some more arms before the panel's final recommendations are due Wednesday.

A piece on Politico.com asks if the panel was doomed from the start. After months of reports about how bitterly divided the commission members are - it's hard to imagine that 14 of the 18 members will come to a consensus on much of anything meaningful.

And, this being Washington, there's plenty of finger pointing to go around.

There are the Republicans who co-sponsored the bill to create this commission and then voted against it.

Some even wonder if President Obama himself designed the commission to fail... to save him from making the tough decisions.

He set the December 1 deadline - which meant decisions about the deficit wouldn't factor into the midterm elections. Also, the president has ruled out tax increases for 98 percent of taxpayers.

As for the panel itself, Republican members have made it clear they don't want to consider tax increases... while Democrats don't want to touch Social Security - leaving precious little common ground.

All this makes it increasingly difficult to believe this commission will make a serious dent in our $13 trillion-plus deficit.

Nonetheless, some close to the commission are sounding upbeat - saying they've made significant progress in the last week and that they've "got a chance."

Here’s my question to you: Was the deficit commission a pointless exercise from the start?

END_OF_DOCUMENT_TOKEN_TO_BE_REPLACED

Black Friday stampedes, arrests and fights; what's happened to us? 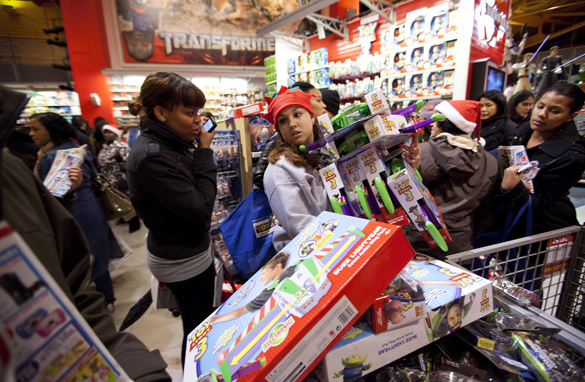 The holiday season is upon us - and by the looks of things, we ought to be ashamed of ourselves.

Some of the behavior on display as Americans hit the stores for Black Friday deals was downright disgusting, including stampedes, arrests and fights. And it’s all in the name of buying holiday gifts for our loved ones.

Here are some reports from what happened at stores around the country:

Here’s my question to you: In light of stampedes, arrests, and fights on Black Friday, what has happened to us?