Can Palin convince people she's qualified to be president?

Get ready for what could make an outstanding two years of television:
[cnn-photo-caption image=http://i2.cdn.turner.com/cnn/2010/images/11/17/art.palin.jpg caption=""]
Sarah Palin says she is seriously considering running for president in 2012.

The drop-out former governor of Alaska tells The New York Times Magazine that she's having discussions with her family about a potential run because she says they are "the most important consideration."

Palin says if she decides to run, she would need to bring more "trustworthy" strategists onto her team. She once again claims she was thrown under the bus by strategists on the campaign of GOP presidential candidate John McCain. She says she needs to be careful about who she lets into her inner circle.

Palin also takes a shot at what she calls the "lamestream media." Although she mainly appears as a paid contributor on the F-word network and communicates with the public via Twitter and Facebook, Palin insists she's "not avoiding anything or anybody," adding that she's "out there" and that she wants to talk about her record.

However, Palin acknowledges that one hurdle she'd have to face is proving that record: "That's the most frustrating thing for me - the warped and perverted description of my record and what I've accomplished over the last two decades."

She's right on this count. She's going to have to prove herself.

Several recent polls show more than half of Americans give Sarah Palin an unfavorable rating. According to Gallup, Palin's unfavorable number is at 52 percent - the highest ever. Another recent survey shows a whopping 67 percent see her as unqualified to be president.

Here’s my question to you: How can Sarah Palin convince people she is qualified to be president?

END_OF_DOCUMENT_TOKEN_TO_BE_REPLACED 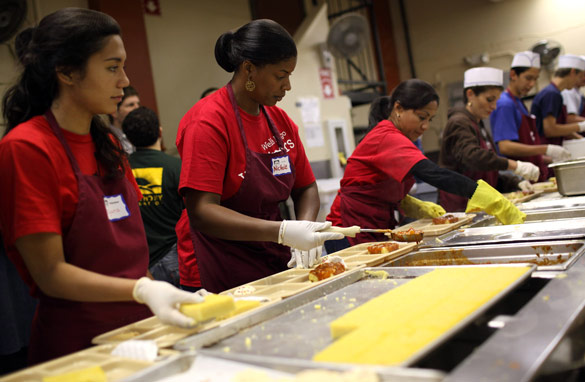 As most of us get ready to gather around a bountiful Thanksgiving feast next week... and gorge on turkey and pumpkin pie, here's something to think about:

45 million Americans were food insecure last year - according to an Agriculture Department report.

This means they had difficulty feeding one or more of their members because they didn't have enough money. That's 14.7 percent of all U.S. households - or about one of every seven.

The situation was especially bad for about one-third of the households which reported very low food security.

These numbers are higher than in 2008, and represent the highest levels since the government starting keeping track 15 years ago.

The report found the households most likely to go hungry included those headed by single parents. Access to food was also worse in big cities and among African-Americans and Hispanics.

Out of the 50 states, food insecurity was highest in Arkansas - at nearly 18 percent - and lowest in North Dakota, at close to seven percent.

With numbers like these, it's no surprise that more people are participating in government-sponsored food programs:

More than 15 million households used food stamps in any given month in 2009 - that's a 20 percent jump from the year before. Rates also rose for the free lunch program and the Supplemental Nutrition Program for Women, Infants and Children.

The report also shows the number of households getting emergency food from a food pantry almost doubled between 2007 and 2009.

Here’s my question to you: What does it mean when U.S. hunger is at the highest level in 15 years?