Two years later, do you ever miss Pres. Bush? 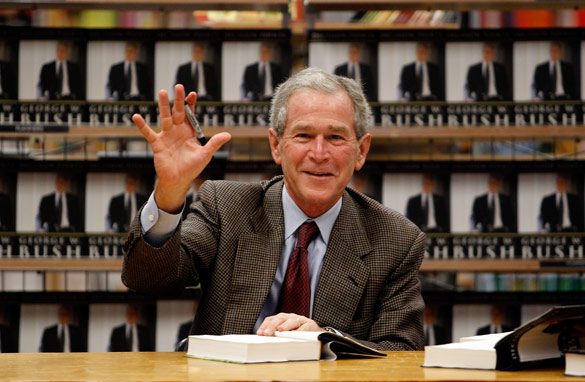 George Bush is out hawking a new book, and suddenly the former president is popping up all over the place, from broadcast news interviews to Oprah's couch.

Two years later, it seems worth comparing the former occupant of the Oval Office to the current one.

Howard Kurtz writes in his Daily Beast column that the contrast between presidents Bush and Obama in recent appearances could hardly be sharper. Kurtz calls it the Decider versus the Agonizer.

Bush, as always, talks in those short, declarative sentences and appears sure of himself - even on weighty issues like waterboarding, Saddam and WMDs. On the other hand, Kurtz writes that President Obama's "finely rendered prose" and meandering around any topic makes him sound like a think tank analyst.

Kurtz points out that Bush doesn't have nearly as much on the line here, except maybe some image rehab. He compares the man who approved torture to the man who tortures himself.

After eight years of President Bush, it felt like most of the country couldn't wait to be rid of him. "Bring 'em on," "Wanted dead or alive," and "I'm the decider," had gotten on everyone's nerves. Much of America welcomed the more intellectual and eloquent Barack Obama with open arms. But the new love affair is shaping up as a bit of a one night stand.

Forty-five percent of those surveyed in a recent CNN/Opinion Research Corp. poll say Bush was a better president, compared to 47 percent who feel that way about President Obama.

A year ago, only 34 percent thought Bush had been a better president, compared to 57 percent for Mr. Obama.

At this point, the trend is not President Obama's friend.

Here’s my question to you: Two years later, do you ever miss President Bush?

Wilson writes:
As a Texan, I should have some sort of fondness for the former president. He seems to be a good man not up to the task who surrounded himself with the worst team at the worst possible moment. Miss him? I can't afford to. Jack, you seem to want to have the Bush years seem nostalgic, to fawn to the recent elections where we gave the keys back to the kids that wrecked the car in the first place.

Susanne writes:
President George W. Bush is a man who is comfortable with who he is and a man of integrity. He definitely wasn't a perfect president. He had to deal with some very tough circumstances and I believe he always had America's best interest at heart. You can see it in his eyes. I miss him as our president!

Ken in Maryland writes:
People in this country have incredibly short memories, hence the return to Republican power last week. Bush was a disaster for this country. Do I ever miss him? Not for a second.

Duane writes:
Yes, I miss him. He was straightforward and didn't beat around the bush, no pun intended. When he told the nation something, he said what he meant. There haven't been many presidents like him!

Scott writes:
Absolutely not. In fact, I am quick to the draw when the ex-president appears on the television in order to change the channel - to skip the reminder of the previous eight years.

Jerry in California writes:
Absolutely. Compared to what we have seen from Obama to date, there is no comparison. Bush was honest and forthright with the welfare of the people as goal #1; Obama is a political hack with people surrounding him who put politics ahead of governing the country for the good of the people!

Pete writes:
Sure I do, and admit it, Jack – you do too! The never-ending supply of material he provided kept you employed for 8 years.