Has Democratic leadership been "authoritarian" and "closed?"

A candid Congressman... it's an endangered species in Washington. Unless they're retiring and have nothing to lose by being honest.
[cnn-photo-caption image=http://i2.cdn.turner.com/cnn/2010/images/11/01/art.baird.jpg caption="Representative Brian Baird (D-WA)."]
The Wall Street Journal interviewed Congressman Brian Baird, a six-term Democrat from Washington State who's retiring at the end of this term.

Baird calls out the Democratic leaders, saying they're "authoritarian" and "closed." He says they've repeated some of the Republicans' errors: "We've made some of the same damn mistakes, and we were supposed to be better. That's the heartbreak."

And we're talking about a loyal Democrat here. Baird voted for all of the Democrats' legislative priorities - including the stimulus bill, health care reform and cap and trade. Although he does admit that all three have serious flaws.

Baird says he was very excited when his party won control of Congress in 2006, but saw troublesome signs early on. For example, right after the election, he says Speaker Nancy Pelosi abandoned all work on a rules package to make the House more ethical. He says the leaders told party members to quote "trust them to clean things up."

That worked out well, didn't it?

Baird says he was optimistic when President Obama was elected. But the White House's decision not to make job creation its top priority made him lose hope pretty quickly.

His advice for incoming Republican members of Congress is to "treat the voters like adults."

Here’s my question to you: One retiring Democratic congressman says the party's leadership has been "authoritarian" and "closed." Is he right?

END_OF_DOCUMENT_TOKEN_TO_BE_REPLACED

If Dems get crushed, how much is Pres. Obama to blame? 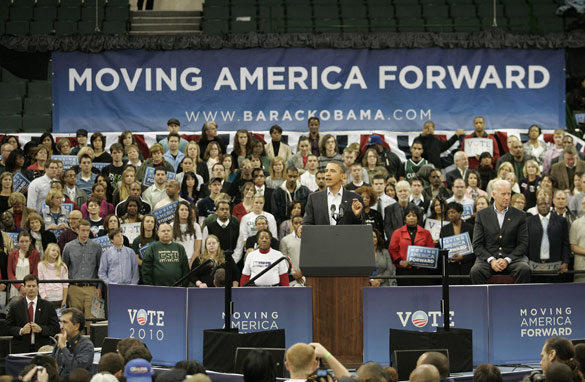 What a difference two years makes.

In 2008, President Obama rode into the White House on a wave of broad voter enthusiasm, the likes of which hadn't been seen in this country in decades.

Fast forward two years, and the president's party is expected to get crushed in Tuesday's midterm elections. The latest USA Today/Gallup Poll shows the largest Republican margin in House voting in several generations.

And regardless of the turnout, it's looking more and more like Republicans will win more than the 39 seats needed to gain control of the House.

Experts in both parties keep revising their estimates upward. Many now believe the Democrats will lose more than 50 seats, and some are putting that number as high as 70.

Meanwhile, critics are heaping a lot of the blame on the president.

A piece in the London Telegraph suggests that by abandoning his own talk of bipartisanship, President Obama divided the country and set his party up for defeat.

The piece points out how Bill Clinton has held more than 100 events around the country while President Obama is mostly limiting himself to the friendly blue states. This is striking because Barack Obama rose to fame as a state senator by shooting down the notion of a red America and a blue America.

Many also feel the president didn't use his office to address the most pressing issue, the economy. Instead he focused on the "grand issues," such as health care.

And how's this for symbolism: . In Cleveland, Ohio, on Sunday, he spoke in an indoor arena that was nearly half-empty. And on the eve of the midterm elections, President Obama - the leader of the Democratic party - has no public events on his calendar.

Here’s my question to you: If the Democrats get crushed tomorrow, how much blame does President Obama deserve?