Spending cuts in U.S. lead to what we’re seeing in France? 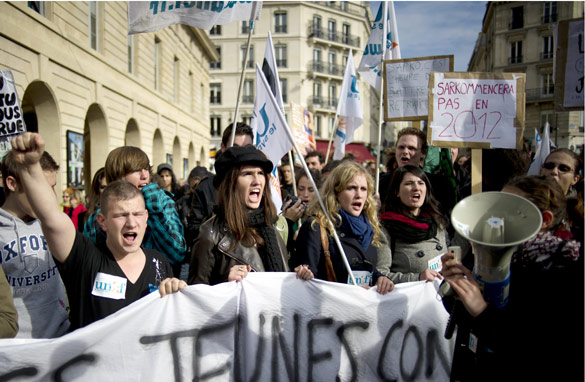 Take a good look at what's going on in Europe, because we just might be next:

As France tightens its fiscal belt, protesters continue to take to the streets.

Earlier today, the French Senate passed the final draft of a bill that raises the minimum age for retirement from 60 to 62, and raises the full retirement age from 65 to 67.

This pension reform measure, which is expected to become law next month, has drawn more than a million protesters.

Unions have walked out on refineries, choking the nation's oil supply. There have been strikes at major ports, disrupted train service and garbage collection. More than 9,000 tons of rotting garbage are piled up in the streets of Marseilles alone.

Students have also come out by the thousands to demonstrate against the government cut-backs. In all, it's estimated these strikes are costing France's economy more than $500 million a day.

And it's not unlike what we saw last spring and summer in Greece, where tens of thousands protested sweeping reforms there, including cuts in pension benefits and increasing the retirement age to 65.

Meanwhile, despite all the budget cutting, it probably still won't be enough. Experts say Greece is likely to default over the next three years.

There's a lesson in all this for the U.S. If our leaders want to get serious about this nation's staggering deficits, they're going to have to make tough cuts – to things like Social Security, Medicare, and Medicaid. They're going to have to raise taxes – maybe a lot – and perhaps raise the retirement age. In other words, it could get very, very ugly.

Here’s my question to you: Will spending cuts in the U.S. lead to the kind of thing we're seeing in France?

Interested to see which ones made it on air?

Whatever the solution to our economic woes may be, one thing for sure is that it will be painful to many folks. None of the politicians running for election will talk about this upcoming pain which I find incredibly interesting. On the flip side, the American people don't even see it coming and think all the solutions will be easy. Won't they be surprised. I appreciate your bringing this up.

Once something is given, it's almost impossible to take away. Political pandering to voting blocs and misguided liberalism have made us weak and dependent. Very soon we'll be asked to accept the burden of sacrifice as Americans used to do...patriotically, without resorting to French-type hissy fits. Ultimate reaction will depend on the inspiration of the leader doing the asking.

No way. The politicians in France and England have guts. They really do have the best interests of their countries at heart, so they make the tough, cost-cutting decisions despite their unpopularity with so many voters. American and Canadian politicians are gutless wonders, concerned only about offending no one and getting re-elected. There will be no general strikes or other civil unrest in America. Just eventual bankruptcy.

Jack, If you ask the people in the street what our national debt is, 1 in 100 would know it's $13.6 trillion dollars. The other 99 are completely clueless. What does that tell you about the problems we face in the future? It tells me that we are in DEEP, DEEP trouble.

Jack, It's not spending cuts that will lead to the kind of things we are seeing in France and Greece. It is the entitlement society we have created. Social Security, Medicare, Medicaid, welfare, and the eventual takeover of health care by the feds are what will lead us to violence in the streets when the government finally goes bankrupt! Socialism doesn't work, Jack! Show me the list of great socialist nations brimming with a healthy middle class with an unemployment rate under 7% and a government with a budget surplus!

Jack, I do not think it will make a difference to the average American. As long as there is Monday night football, a case of beer and a credit card for the wife to go to the mall then all is right with the world. Sad to say but true.