How much do attack ads damage our faith in our leaders? 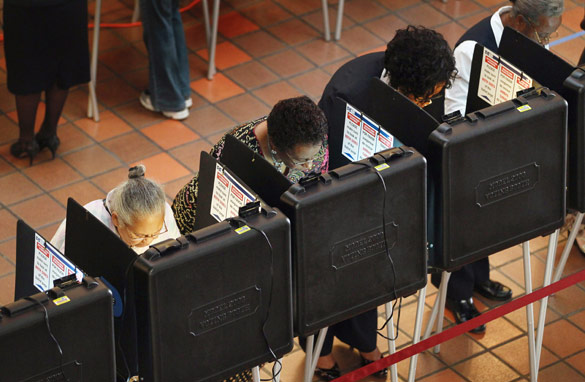 People cast their votes at a polling station set up at the Miami-Dade Government Center. Florida residents headed to the polls to cast votes on the first day of early voting in the midterm elections. (PHOTO CREDIT: GETTY IMAGES)

Political campaigns are a brutal sport - but this season's attack ads seem to be nastier than ever.

Politico reports that while candidates have always attacked each other, distorted their opponents' records and taken their statements out of context... this year's "napalm-flavored" attack ads take it to a whole new level.

Some of this year's ads suggest that the politicians running for office aren't just untrustworthy or inexperienced, they are cruel and sick individuals.

For example: Campaign ads accuse candidates of wanting to gas shelter animals, of wanting to inject young girls with dangerous drugs, of letting men beat their wives... and of helping child molesters - either by buying them Viagra or protecting their privacy.

A lot of these ads are coming from incumbents who are worried that they're on their way out in November. They seem to think that by turning their challengers into monsters, they have a chance of winning.

One of the most notorious ads of the campaign season is by a Florida Democrat who calls his challenger "Taliban Dan."

While some of these over-the-top attack ads contain some level of truth, experts suggest that at a certain point they become counterproductive. They say voters tend to believe the worst about politicians, but when attacks become too outrageous, they stop buying it.

Meanwhile, the people running these ads want to be - or already are - our leaders in Washington. And it says a lot about the kind of people representing us that they're willing to resort to such a low level of rhetoric in order to win.

Here’s my question to you: How much do attack ads damage our faith in our leaders?

END_OF_DOCUMENT_TOKEN_TO_BE_REPLACED

When it comes to Afghanistan, what, exactly, is the point?

More than nine years into the war in Afghanistan, there doesn't seem to be a lot that's good to report.
[cnn-photo-caption image=http://i2.cdn.turner.com/cnn/2010/images/10/18/art.terrorists.jpg caption="Osama bin Laden (L) and Ayman al-Zawahiri (R)."]
From every conceivable angle, things are a mess - starting with the country's attempts at democracy. Officials have now postponed announcing the results of last month's parliamentary elections because of widespread suspected fraud. An election panel spokesman said Monday that about 10 percent of votes have been disqualified because of the suspected fraud.

The New York Times reported that the fraud included everything from stuffing the ballot box to citizens being forced to cast their votes at gunpoint to election officials and security forces working in cahoots with corrupt candidates. Lovely.

On the security front, deadly insurgent attacks on U.S. and coalition troops are rising. It’s the deadliest year of the war for foreign troops, which includes Americans and service members from other nations. A recent U.N. report shows 1,200 Afghan civilians died and 2,000 more were wounded in the first six months of this year.

It's no wonder American support for the war in Afghanistan is at an all-time low. The latest CNN/Opinion Research Corp. poll shows 37 percent of those surveyed favor the war. Fifty-two percent say the operation has turned into another Vietnam.

You know, the reason we're in Afghanistan to begin with? A senior NATO official says bin Laden and his deputy, Ayman al-Zawahiri, are hiding close to each other in houses in northwest Pakistan. No hiding out in caves for these guys - instead al Qaeda's top leaders are believed to be living in relative comfort, protected by locals and the Pakistani intelligence.

Here’s my question to you: When it comes to Afghanistan, what, exactly, is the point?