Would you support N.J. Governor Christie for president? 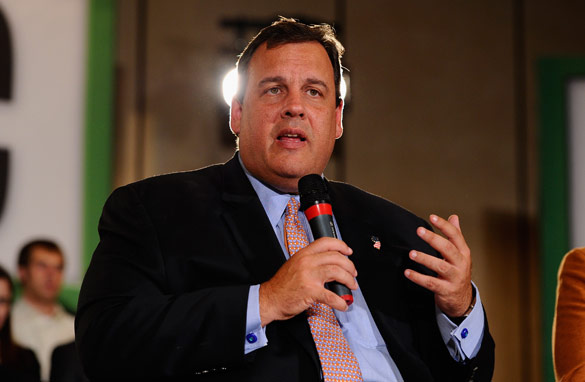 We're talking about a politician who gets elected by telling the voters one thing ... and then, when he gets into office, doing that exact same thing. This almost never happens.

And in the process, New Jersey's Republican Gov. Chris Christie is putting the lie to the traditional idea that political success must be accompanied by squandering the taxpayers' money on all manner of foolishness and extravagance.

In fact, this guy is now being talked about more and more as possible presidential material.

Christie was elected governor of New Jersey with marching orders to stop spending money. And lo and behold, that's what he's doing.

For example, just last week, he pulled the plug on the largest public transit project in the country, a commuter tunnel running under the Hudson River into Manhattan. Christie said New Jersey couldn't afford its share of the cost overruns. Imagine that.

Christie has also taken on the teachers' and public workers' unions and their expensive contracts. And he's dramatically slashed spending, including for education and aid to towns and cities.

Of course, it's totally ruffling the feathers of the status quo, the "you scratch my back with the taxpayers' back scratcher" crowd, who is used to their politicians handing over the public's money in exchange for their support. And that's just a wonderful thing.

Imagine what a guy like this could do in Washington, where Nancy Pelosi and Harry Reid can't even be bothered to get a budget passed, let alone exercise any fiscal restraint. The possibilities seem breathtaking.

Of course, it will be a little tough to convert to socialism if the government money well dries up. But then, that's the point, isn't it?

Here’s my question to you: Would you support New Jersey Governor Chris Christie if he ran for president?

Lance in California writes:
Jack, My first reaction is "yes"! He has certainly kept his word to cut the budget, and he seems strong enough to deal with the press and the lunatic left. The mere fact that he can stand up and tell the state unions to "suck it up, the budget is being CUT" makes him interesting to most conservatives. I would certainly give him a close listen!

T.C. writes:
Jack, He's the man for the job. I live in Philadelphia so I've been following him closely. He is what the middle class needs in the White House.

Judy in California writes:
How about we send this guy to California before we talk presidency? If he can clean up the mess these morons have made here, I will vote for him for president. And I am a Democrat.

Al in New Jersey writes:
You have got to be kidding. Christie has still not come up with multi-year financial plans, alternative financing and new revenue sources for New Jersey, and other concepts he promoted early in his term.

Jim in Citrus Springs, Florida writes:
Absolutely. He's a breath of fresh air. Christie makes one think of Teddy Roosevelt: a can-do, will-do, just get out of the way, special interest be damned. I sure like what I hear.

Dan in Louisville, Kentucky writes:
It is certainly appealing to hear about a man who says what he means and does what he says. However, we Americans are still so naive that we think we are electing an emperor or a benevolent dictator. How would "President Christie" persuade Congressional Democrats who can't say "NO" to spending programs, or Republicans who say "NO" to everything?

Mickey writes:
Yes! I would work for him and do what I could to get the votes. A man who would cut spending and the size of government sounds good to me. You think he would tax churches and CNN? Now, that would be perfect!