Why are more people voting in the midterms?

If the primaries are any indication - these midterm elections might set records when it comes to voter turnout.
[cnn-photo-caption image=http://i2.cdn.turner.com/cnn/2010/images/06/09/art.voting.jpg caption=""]
USA Today reports that the number of voters casting early ballots in the primaries this year was up 50 percent over the 2006 midterms. That's a huge increase. About six million people took part in early voting in the 13 states they reviewed.

This increase in early voting is a game-changer. It forces campaigns and interest groups to alter their tactics as they reach out to voters ahead of November's election.

Although the midterms are still more than three weeks away, early or absentee voting is already underway in 10 states. And, early voting will kick off in another 17 states plus the District of Columbia in the next two weeks.

Experts say, for campaigns an early vote for you is like money in the bank. But an early vote against you is a lost vote that no TV ads or speech can change.

Others point to a trend where early voters tend to hold back and file their ballot closer to election day. That's because they haven't made up their minds as quickly as they do about presidential candidates.

Midterms are notorious for lack of voter interest and low turnout, but if the electorate is really as angry as we keep hearing, things may be different this time.

If people want their voices heard when it comes to the state of our economy, the skyrocketing and unsustainable deficits, taxes, war, health care, etc... they better turn out on November 2.

Here’s my question to you: Why are so many more people voting in these midterm elections?

END_OF_DOCUMENT_TOKEN_TO_BE_REPLACED

Why are many whites turning against Pres. Obama & Democrats? 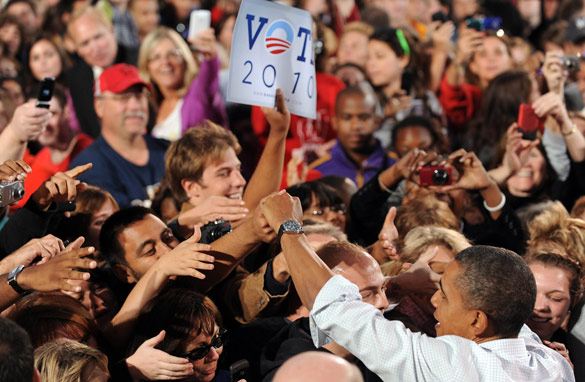 President Obama continues to have problems when it comes to race.

White independent voters helped make Barack Obama the first African-American president in history, but now a lot of them apparently don't like him so much anymore.

And there are more signs of trouble when it comes to support from white voters - not just for the president but for the Democrats in general.

Another new poll shows working-class whites are flocking to the Republican Party, which will make it even tougher for the Democrats to keep control of Congress.

Compare that with white people with college degrees, who are split evenly between the two parties; and minorities, who heavily back the Democrats.

Working-class whites are a key voting bloc - they make up about four in 10 voters nationally, and the Democrats can't afford to lose more of them. A lot of these voters were never too fond of Barack Obama to begin with. Remember Obama's comments about bitter small-town voters who cling to their guns and religion?

The silver lining for Democrats here is almost 30 percent of working-class whites in this poll say they may still switch candidates. If they don't, the Democrats could see a tsunami.

Here’s my question to you: Why have so many whites turned against President Obama and the Democrats?