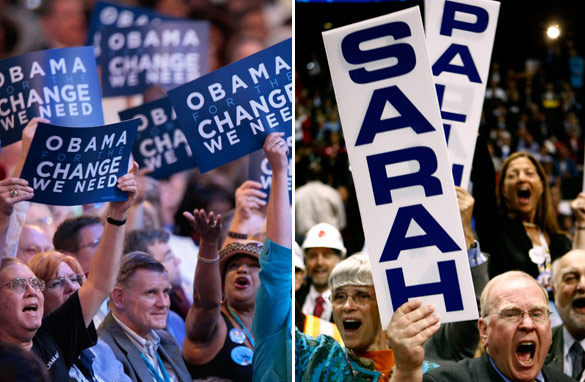 Supporters hold up signs during the DNC (L) and RNC (R) back in 2008. (PHOTO CREDIT: GETTY IMAGES)

Sarah Palin could be President Obama's savior. When it comes to the 2012 presidential race, a new poll suggests that Obama could lose - unless he's running against Palin.

The Politico/George Washington University Battleground Poll shows that a majority of Americans are considering voting against Obama. Forty-four percent of those surveyed say they will vote to replace Obama, and 13 percent say they'll consider voting for someone else. Only 38 percent say he deserves re-election.

Voters are down on the president for lots of reasons, but especially his policies. By double digits, they disapprove of his new health care law, and they trust congressional Republicans to create jobs more than Obama. This is despite the fact that a majority of voters like him personally.

Obama's best hope of winning a second term just may be Alaska's dropout governor, Palin. If the election were held today, voters say, they would back the president over Palin by a 9-point margin.

Support for Palin is weak in the Midwest and the Northeast ... and almost 60 percent of voters say her actions since since resigning as governor have made them less likely to vote for her for president.

Female voters are especially negative about Palin. Fifty-four percent have an unfavorable view of her. No other Republicans tested in this poll had such high negatives among women.

It's not likely the Republicans would be dumb enough to nominate Palin after what she did to John McCain's run for the White House, but when it comes to politics, nothing should surprise us anymore. And if it happened, well, just imagine if the woman who helped bring down McCain's campaign would help re-elect the Democratic sitting president.

Here’s my question to you: If President Obama runs against Sarah Palin in 2012, who would you vote for?

Evelyn in Columbus, Ohio writes:
No contest: Obama. I've never been a fan of those Pay Per View fights, but I'd pay big money to see Palin attempt to debate Obama.

Rose in Arizona writes:
If my only two choices were Obama and Palin, I would vote for Palin. Not because that is what I really want, but my vote would be a vote against Obama. Right now I think Palin is the lesser of the two evils. I would vote for Mickey Mouse before I would give Obama a second term.

Guy writes:
Jack, That's like asking who would you like at quarterback, Drew Brees or Don Rickles? Obama has my vote NOW. If Palin wins the Republican nomination, I might break the lever pulling it for Obama.

Paul writes:
Voting for Sarah Palin would be like setting your hair on fire and putting it out with a hammer.

Ed in California writes:
Yes, Jack, I would vote for Caribou Barbie for president as long as she has Sabrina the teenage witch as the V.P. Are you serious? How self-destructive do you think Americans are? Don't answer that.

Mike writes:
Maybe instead of an election, we could settle the contest with a spelling bee.