It's not like the Democrats don't have enough problems headed into the midterm elections.
[cnn-photo-caption image=http://i2.cdn.turner.com/cnn/2010/images/09/15/art.poverty.jpg caption="A couple applies for food stamps after being evicted from their home following job loss. They then moved into a motel with their three children."]
Now comes word that the number of people in the U.S. who are in poverty is on track for a record increase on President Obama's watch.

It's not necessarily President Obama or the Democrats' fault, and is likely the product of the worst economic downturn since the Great Depression. But some political damage will likely accrue to the Democrats anyway.

Census figures for 2009 are out soon, and it's expected the poverty rate will have increased from 13.2 percent to 15 percent of our population. That translates to 45 million people - or one in every seven - being poor.

It would be the highest increase in poverty since the government began keeping records in 1959.

Among working people aged 18 to 64, poverty is expected to have increased from 11.7 percent to 12.4 percent.

That would be the highest since 1965 when President Lyndon Johnson launched the war on poverty, which greatly expanded the federal government's role in social welfare programs from education to health care.

Here’s my question to you: How will record levels of poverty in the U.S. impact the midterm elections?

Is the Tea Party for real? 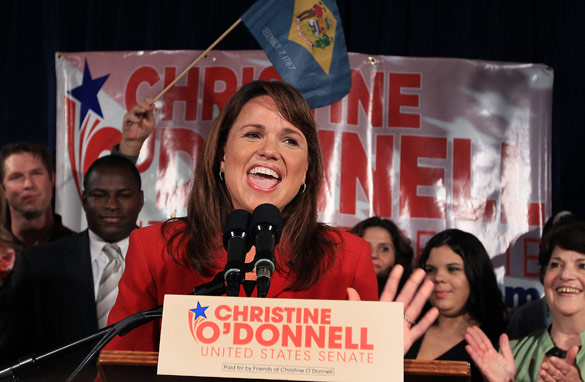 The Tea Party movement might just be the best thing that ever happened to the Democrats - raising questions about internal divisions among Republicans.

Castle, who held elected office in Delaware for more than 40 years, had the entire national GOP establishment behind him while O'Donnell was endorsed by Sarah Palin.

Many believe O'Donnell's win means the Democrats now have an unexpected chance to keep the Delaware Senate seat once held by Vice President Joe Biden. One Republican strategist described the Delaware primary results as "straight out of Harry Reid's dream journal."

Meanwhile, another Tea Party victory came in New York, where Carl Paladino beat Rick Lazio in the primary for governor. Paladino will run against the heavily favored Democrat, Andrew Cuomo.

Although some question the ability of Tea Party candidates to win in the general election, others insist it is one of the most powerful movements in recent American history.

A piece in the Washington Examiner headlined "One nation under revolt" says that while many have ignored or belittled the Tea Party, it has only grown stronger - showing an unprecedented level of activism and enthusiasm.

And here's part of the reason for the Tea Party's success: a new CNN/Opinion Research Corp. poll shows only one in four Americans say they trust the government to do what is right always or most of the time.

Here’s my question to you: Is the Tea Party for real?