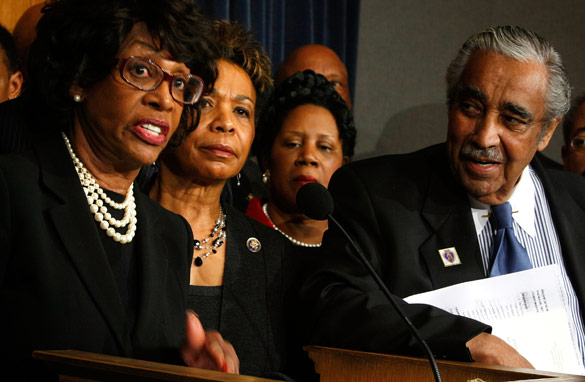 Randy in St. Louis writes:
And why would we do this, delay the proceedings? So these two can win reelection? So they can hope not that many people read the news? This sickens me and I KNOW it's just the tip of an iceberg.

Overby writes:
I don't know if they're innocent or guilty, and I don't care one way or the other, but you'd think if they were innocent they'd be calling for an immediate trial to clear their names, wouldn't you?

Sherrie writes:
These ethics trials are used for harassment by both parties, but mostly by Republicans. It doesn't matter when they are held.

Greg in Pennsylvania writes:
Justice delayed is justice denied. If they are guilty, let them hang. If they are acquitted, then let's get on with the real issues facing the world.

Bill writes:
No, absolutely not. They must be held before the elections so voters have as much information as possible when they head into the ballot box.

Coralie writes:
Should have already been done, although the next Congress may be more willing to hold them accountable.

Kevin in Atlanta writes:
Ethics trials are just a show to reassure us that Congress is capable of policing itself. They mean nothing.

Jafsie writes:
Frankly, what scares me more than more of the same is the wackos who are running to "take back the government," many of whom have no experience, no ideas, and no brains. You think government now is "garbage", just wait and see what you get when the Congress fills up with a bunch of morons who view people who are able to earn a four-year college degree in under six years as "elitists."

Paul writes:
I love ya, man! But sorry, I like Congressman Rangel too.