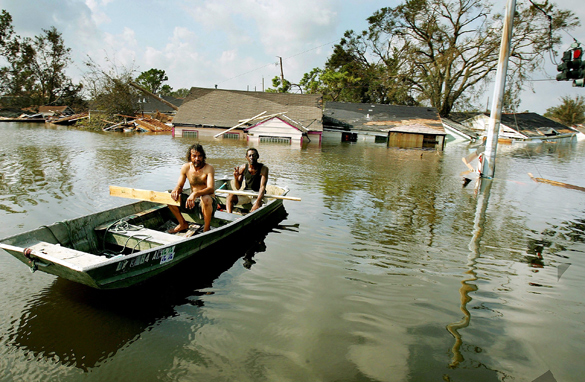 Denny in Tacoma, Washington writes:
It means that the government that we financially support and at times defend with our lives is often not there when we really need it.

Steve in Clifton, Virginia writes:
The big lesson to be learned is that when we as Americans act collectively for each other's common good towards a common goal, we can overcome anything. We need to focus less on party affiliations, race, gender and sexual orientation and focus on the common good of our great country!

Susan from Idaho writes:
There's no place like home. The residents have proven that they are made of the right stuff and have given us all a reason to respect them. I have been to New Orleans many times and what I've seen after Katrina is we were down but never out.

Jeff in Houston writes:
The same thing we learned during the Bush Regime: If you are not a rich, white male with corporate and/or political connections then you really do not matter. Go ahead and die. One less pesky minority type thinking they have rights. What nerve.

John in Alabama writes:
Jack: Have a plan for nature's disasters or man made disasters. Know how to leave the area, and make sure important papers like Social Security Cards, Bank Statements, and Property information are with you. Do not stay anywhere, if ask to evacuate by the authorities. Remember, we only have one life to live, and it is always better to breathe in a new place than to be dead at home.

Andy in Massachusetts writes:
Trust your neighbors to help you when you're down and out; and remember that Rome wasn't built in a day. The people of Naw'lins are its spirit and the spirit is flying high.