Why don't some Democrats want to be seen with Pres. Obama? 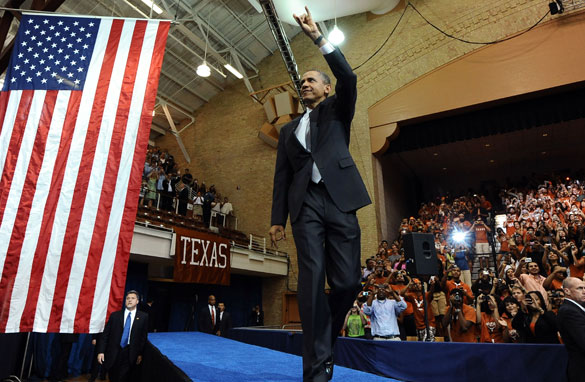 The mid-term elections are shaping up to be an uphill battle for the Democrats.

According to Gallup, the average midterm election seat loss for presidents below 50 percent approval is 36 seats in the House of Representatives. That's compared to an average loss of 14 seats for presidents getting higher marks.

The Republicans need to gain 40 seats this year to retake control of the House, which is pretty close to that average of 36 seats.

And none of this is good news for President Obama and the Democrats. Not only is Mr. Obama below the 50 percent mark – but he's approaching 40 percent in some of the polls.

Some Democrats up for election have already figured this out. When President Obama comes into town, they leave.

Just yesterday in Texas, the Democratic candidate for governor, Bill White, was nowhere in sight when Pres. Obama came to Austin and Dallas for fund-raising events.

The week before it was Georgia, where another Democratic candidate for governor, Roy Barnes, decided not to appear with the president.

The White House insists they're not taking it personally, saying it doesn't say anything broadly about the president's coattails... they say there's never been a president who's been wanted by every single candidate around the country to campaign for them. Which is sort of what you'd expect them to say.

Here’s my question to you: Why don't some Democratic candidates want to be seen with President Obama?

Bob says:
They are aware that the public is disappointed and discouraged that the president has not delivered on his major campaign promises. It's probably unrealistic to expect a complete turnaround on the economy in just 18 months, but his other biggies, Iraq, Afghanistan, and Guantanamo, could have been done on Day 1 with the stroke of a pen. Instead we get a new version of "Mission Accomplished" with 30,000 to 50,000 troops still getting shot at, and nobody being moved out of Guantanamo...Another illusion busted.

Alex says:
Political expediency is the name of the game. People who are not term-limited will always be governed by images if they want to keep their job. Regardless if the president is doing his job correctly or not, if a constituency doesn't like him politicians will stay away.

Mike in New York says:
Simple, they realize that pointing a finger at Bush is not going to win any votes this time around and for some reason, instead of selling the public on what he has done, the president continues to point that finger of his.

Jason says:
As far as I can tell, Democrats are avoiding the president because they are too focused on party concerns rather than the concerns of the nation. I see the president acting in what he believes is the best interest of the country…. When I voted for the president in 2008, I was voting for a man I believed in...and still do. I did not vote for the Democratic Party, and I never will vote for any "party".

Bill says:
Because the president is very unpopular in some areas of the U.S. Politically, it is the kiss of death to be associated with him.

Connie in Tennessee says:
Those are the "Blue Dog" Democrats that were never really Democrats in the first place. They don't have the interest of the people at heart, only self-interest.

Jamie in Sarasota, Florida says:
Because they don't want to be unemployed like the people they represent.