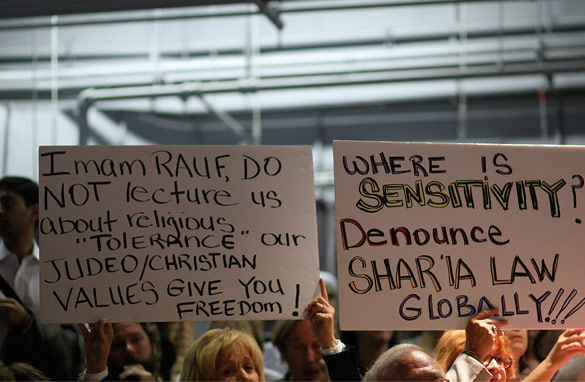 Andy in Massachusetts writes:
Hell no. I'm kind of an Old Testament guy on this issue: eyes for an eye and teeth for a tooth. I haven't seen enough eyes or teeth yet. Radical Muslim eyes and teeth.

Darren in Minneapolis writes:
In a country that promotes and celebrates tolerance, freedom and diversity, I really don't understand what the problem is, Jack. I want to know how big a Muslim-free buffer around Ground Zero needs to be in order to make opponents of the mosque happy? How far away should the Mosque be? 20 blocks? 20 miles? Muslims didn't attack us on 9/11 - Terrorists did. Comparing all Muslims to terrorists is just like comparing all Christians to Timothy McVeigh. The prejudice being displayed here proves that the terrorists have won - we've abandoned our principles.

Bill writes:
Politically no, the wounds are still open and Americans are still hurting from the senseless attacks on our citizens. Ground Zero is sort of like the Alamo of the new age. It has almost, if not, achieved, the status of shrine. So this is no different than building a Christian Church near a Muslim holy site.

Jeff in Minnesota writes:
All this points out to the Muslim radicals is that the war on terror is just what they claim it is: a war on the Muslim religion. Pres. Bush made it very clear from the start that it was radical fundamentalist Muslims that were the problem. We seem to have forgotten that fact. All religions have done terrible things throughout history, yet we don't see protests against them or where they build their churches. Muslims are not the problem. Radical fundamentalism is the problem, Muslim, Catholic or any other religion.

Kim in Dodge City, Kansas writes:
Even though our country is in the death grip of "political correctness," this is probably one of the worst things to do. If the mosque is built, it will forever be an irritant and a flashpoint for violence and mayhem. A moderate Muslim is a totally fictional character. By choosing to follow their belief, they are sanctioning death to all those who embrace any other so-called religion.

T. in Flemington, New Jersey writes:
As a Jewish American, I'm disgusted with right-wingers who always equate "Muslim" with "terrorism." Islam didn't bring down the towers! Tell the Half Governor she doesn't know what she's talking about, yet again.