As oil continues to gush into the Gulf of Mexico, the debate over deepwater offshore drilling is heating up.
[cnn-photo-caption image=http://i2.cdn.turner.com/cnn/2010/images/06/23/art.oil.jpg caption=""]
The Obama administration is pushing back after a federal judge ruled against a six month moratorium the president put in place after the BP oil disaster.

Interior Secretary Ken Salazar says the government will issue a new moratorium that will be less restrictive on drilling.

Salazar says that we need a "pause" on deepwater drilling.

The White House says it doesn't make sense to keep drilling at these depths without knowing what happened - that doing so puts lots of people in danger.

But not everyone agrees.

Many in the offshore oil industry, as well as local politicians, have been calling for the ban to be lifted, saying it's hurting business and throwing people out of work.

The federal judge sided with the companies which filed suit against the government saying they are suffering "irreparable harm" as a result of the moratorium.

Louisiana's Governor Bobby Jindal and Senator Mary Landrieu are asking the Obama administration not to appeal the ruling.

Landrieu, a democrat, says she would rather they find a way forward that would meet the goals of safety and responsibility without jeopardizing an entire industry.

Here’s my question to you: Should deepwater offshore oil drilling be banned?

END_OF_DOCUMENT_TOKEN_TO_BE_REPLACED

How does McChrystal episode affect confidence in Afghanistan war? 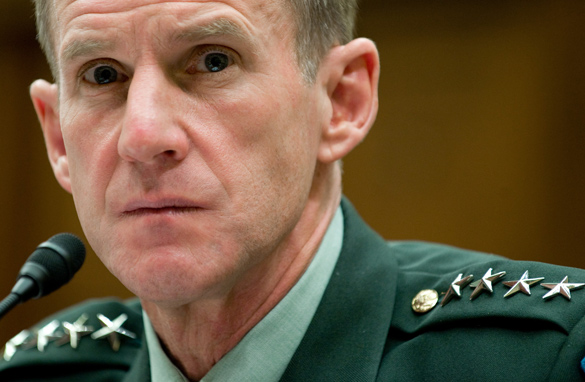 Sometimes timing is everything… and when it comes to the war in Afghanistan the timing of the departure of General Stanley McChrystal is awful.

The U.S. is in the midst of escalating the nine year old war in an effort to defeat the spreading power of the Taliban and Al Qaeda.

This surge of tens of thousands of U.S. troops was pretty much McChrystal's plan - and he had close ties with leaders in Afghanistan and neighboring Pakistan.

Also - summer in Afghanistan is usually a time of heavy fighting and allied forces are on the eve of the Kandahar offensive. This month is on track to become the deadliest month for NATO troops since the start of the war in 2001.

But the president decided that McChrystal had to go. and on one level, you can't argue with him.

McChrystal's job was to implement the president's war plan on the battlefield. But he and his inner circle found it appropriate to trash top administration officials and make destructive personal attacks to a reporter from Rolling Stone magazine.

Just imagine what our enemies must think - not to mention families of the thousands of brave troops fighting in Afghanistan.

It put Pres. Obama in a very tough spot - he risked looking weak if he didn't fire the general... and now he could be accused of undermining his own strategy in Afghanistan by cutting loose the guy he put in charge at such a key moment.

Even before this incident - only 42 percent of Americans said they favor the war in Afghanistan - that's down six points since March. 56 percent oppose it.

Here’s my question to you: How does the McChrystal episode affect Americans' confidence in the Afghanistan war?