Will lack of immigration reform hurt Democrats in midterms? 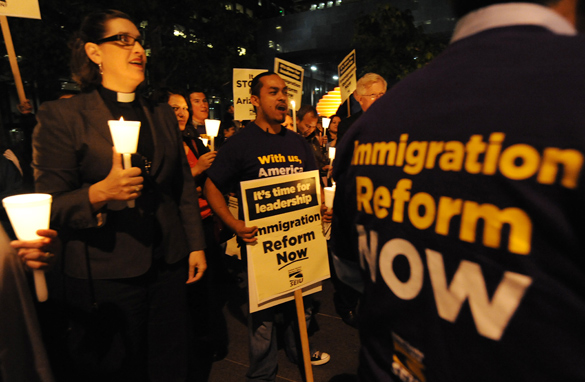 The debate over immigration reform has turned into a childish game of "he said - he said."

Republican Senator Jon Kyl says Pres. Obama told him in a one-on-one meeting, "if we secure the border, then you all won't have any reason to support comprehensive immigration reform."

Kyl suggests border security is being held hostage by the Democrats for political reasons.

The White House denies it, saying: "The president didn't say that and Senator Kyl knows it."

But Senator Kyl is not backing down from his version of events.

Actually, it almost doesn't matter who you believe in this. The truth is that immigration reform is looking less and less likely to happen yet again - what a surprise. But this time inaction could cost Democrats dearly.

Take Senate Majority Leader Harry Reid, who is facing an uphill battle for re-election in Nevada. Reid is now pandering to Latinos there with Spanish TV ads.

He needs their vote - and is still hoping they'll support him even though he promised immigration reform and now likely won't deliver.

Meanwhile as Arizona moves forward with its own immigration law, the Obama justice department is thinking of suing the state.

It's absolutely absurd. The federal government refuses to do anything about the illegal immigration crisis in this country. After all if they sealed the border, if they enforced their own laws against illegal immigration, Arizona wouldn't need such a law in the first place. Our government is badly broken.

Here’s my question to you: How badly will a lack of immigration reform hurt the Democrats in the midterm elections?

Tom writes:
I think that immigration will lead to the demise of the Democratic Party. Obama won the election primarily due to Hispanic votes and now he can't deliver what he promised. Yes the economy is bad but immigration should be at the top of the agenda. As a Democrat, I'm sorry to say that this will destroy the Democrats for the midterm elections.

Kenneth in Frisco, Texas writes:
If the White House is telling the truth about the Kyl conversation, then why have the borders not been secured? It's the first step most Americans want before comprehensive immigration reform. The answer is simple: the current administration wants amnesty and 13 million more votes. They could care less about the problems of the American citizens in Arizona, Texas and New Mexico.

Russ in Iowa writes:
Hopefully, it will knock the Democrats out of D.C. and into the spitcan where they belong, along with their 'progressive pile' of ideas!

Lene in Illinois writes:
It probably won't hurt them bad at all as long as they keep dangling that carrot. Anyone who wants immigration reform (amnesty) will vote for Democrats and those who want the laws enforced will vote Republican.

Leon writes:
One of the greatest lies being pushed is that all Latinos are for "comprehensive immigration reform". This is not true. I am Latino and I am for the government to do its job, namely to enforce the existing laws. I have a lot of friends who are Latinos and they are also for enforcing and not reform. As a Latino voter there are other things that are more important, such as deficits, wars, and the protection of our values. Politicians, do your job!

Phil in Port St Lucie, Florida writes:
This topic will decimate the incumbent Democrats. But all of the "incumbent politicians" should be skinned and left to rot for their indifference to the voters in the United States.

Tom writes:
With health care and all it ain't gonna matter. They're done.