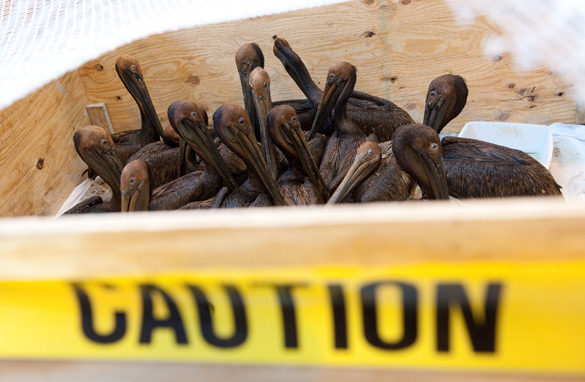 Gene
Most of all I would like to hear that the booms are working, skimming is working and the marine biologists can treat the estuaries, marshes and wetlands. And that they believe fish, animals and fauna will be able to reproduce and grow back to normal life ecosystems within 2 or 3 years.

Paul
He needs to lay the groundwork for a new energy policy in the U.S. Yes, this will include oil, but this is the perfect opportunity to sway public support for new clean energy sources, like solar, wind, and yes... nuclear. We can not have a green energy future without nuclear power.

Remo in Texas
Jack, The reality of it all is that he's blown it. He had the chance and responsibility to act 45 days earlier and he didn't. This is his defining style and these are his results.

A. in Baltimore
I'm not sure that there is anything he can say tomorrow that will make people feel any better. Obviously, the technology required to fix this issue needs to be greater than the one that created it, and sadly, it doesn't exist at present. Why no one is being tasked to create it, I'll never know. This is the country that has sent men to the moon!

Geoffrey in Lowell, Massachusetts
Just the facts. I think he has been telling the truth but the unvarnished truth is that BP was not prepared for this and did not take steps to prevent it… The government does not have all the answers. People who have been asking for small government need to consider what they wished for.

Steven
President Obama should explain to us again how he would meet with no precondition with Ahmadinejad. Then explain why it took nearly two months – and only after incredulity on the part of the citizenry – to meet with someone atop the ladder at BP.

Jonsie
It's a little late for talk. 56 days?