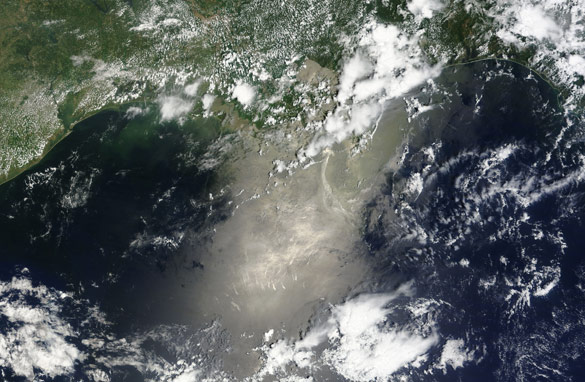 Paul in Whippany, New Jersey writes:
Obama waited way too long. He has proven over and over again in his short time as president that he is not a leader. Thank God he wasn't president when 9/11 happened.

Jane writes:
Katrina was about the Bush administration's refusal or reluctance to deploy existing rescue teams to aid the human beings in immediate danger. We don't have government leak-stopping teams to deploy… If Pres. Obama wants to avoid part of the blame, he needs to see that the spill is really cleaned up, and then that BP suffers some real punishment. Take away their leases and bar them form any federal contracts, and take away the liability limits for all future spills.

Jack writes:
It should be considered Bush's Katrina II. It was under his watch that the oil companies got to call the shots with him and Cheney.

Tod in Tampa Bay, Florida writes:
Let's be clear: this was a private company industrial accident, not a natural disaster. Katrina resulted in more than 1,800 human deaths. This is not a fair comparison. With that said, the White House is in an unwinnable position in that they do not have the capacity to solve the problem. Until the oil STOPS flowing, the government is hostage to the expertise, intelligence and technological capability of oil companies to fix this.

Kathie writes:
Obama has spent a total of approximately 3 hours in the Gulf Coast. He gives a couple flowery speeches and then goes on vacation. This is not leadership. Even Bush (as much as I dislike him) did better. BP and Obama don't seem to have a clue as to what to do.

Gin writes:
If you mean by this question, "Will he get my vote next time?" No.