How confident do you feel about the future?

Some days it really does feel like the end of the world as we know it. There is pretty grim news everywhere you look - from the economy to international threats to natural disasters.
[cnn-photo-caption image=http://i2.cdn.turner.com/cnn/2010/images/05/21/art.world.jpg caption=""]
And people are taking notice. A new Gallup poll shows only 23 percent of Americans are satisfied with the way things are going in the U.S. - that's far below the historical average of 40 percent.

When it comes to the economy, the stock market is taking a beating. The Dow Jones Industrial Average had its biggest one-day drop in more than a year yesterday - nearly 400 points - and has dropped more than a thousand points in a matter of a few weeks.

One top economist, Nouriel Roubini, says the stock market will drop another 20 percent before this correction is over.

Investors are nervous about Europe's debt crisis, among other things. And it's not just Europe. Many worry America's skyrocketing deficits could soon put us on the brink of the kind of stuff Greece is going through.

Overseas, North Korea is threatening all-out war if South Korea retaliates for the North sinking one of its ships. Iran continues its march toward nuclear weapons and claims it could destroy Israel within a week if Israel attacks them first.

In the Gulf, a massive oil spill is threatening wildlife and entire industries up and down the Gulf Coast. And Mother Nature seems unhappy as well… with earthquakes in Haiti, Chile and Taiwan, floods in Tennessee and a volcano in Iceland that continues to spew ash and disrupt European air travel.

A lot to think about on a Friday night.

Here’s my question to you: How confident do you feel about the future?

END_OF_DOCUMENT_TOKEN_TO_BE_REPLACED 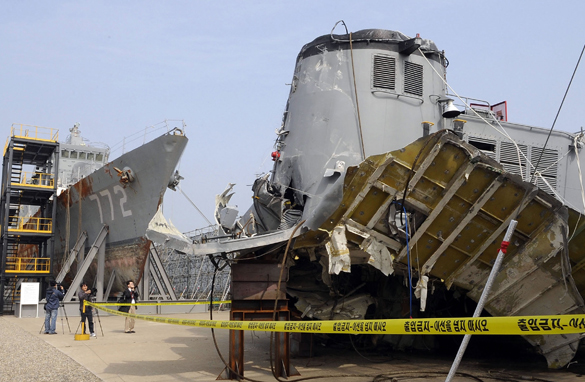 The wreckage of the naval vessel Cheonan is seen, which was sunk on March 26 near the maritime border with N. Korea. A multi-national investigation team concluded that N. Korea's torpedo sank the S. Korean warship, killing 46 sailors. (PHOTO CREDIT: GETTY IMAGES)

Secretary of State Hillary Clinton is warning that North Korea must face consequences... in light of a report that it torpedoed and sank a South Korean warship in March - killing 46 sailors.

Clinton, who was in Tokyo, says it's important to send a clear message that provocative actions have consequences... and that this attack can't go unanswered by the international community. Other U.S. officials are calling the attack "unprovoked and unwarranted."

Tensions are already rising dramatically on the Korean peninsula: North Korea denies it had anything to do with sinking the ship, claiming this is "sheer fabrication." They say that if South Korea retaliates, they will respond promptly with tough measures including "all-out war." Pyongyang is also threatening to back out of a non-aggression pact between the nations.

Meanwhile South Korea claims this attack is a military provocation that violates the armistice agreement between the two countries. They point to results of an official investigation - conducted by international experts - which concluded North Korea fired a torpedo that cut the ship in half.

It's unclear what an appropriate response is. North Korea is already under sanctions because of its missile and nuclear tests.

So how to punish North Korea without starting a war?

One expert suggests there are basically three options: Seoul could act unilaterally by cutting off all trade with the north, Seoul and Washington could take bilateral action by stepping up intelligence or naval cooperation. Lastly, the international community could act as a whole - possibly through the UN Security Council. Sanctions have worked so well in the past, haven't they?

Here’s my question to you: What consequences should North Korea face for sinking a South Korean ship?