What does Rand Paul's Kentucky victory mean for Tea Party?

After more than a year of protests, rallies, speeches and a national convention... the Tea Party movement has taken its first big step toward political relevancy.
[cnn-photo-caption image=http://i2.cdn.turner.com/cnn/2010/images/05/20/art.rand.paul.jpg caption=" Rand Paul "]
Dr. Rand Paul pulled off a stunning landslide victory this week in Kentucky's Republican senate primaries. Paul, an eye doctor with no political experience, defeated the more well-known candidate - Kentucky's Secretary of State who had the backing of Senate Minority Leader Mitch McConnell. What an embarrassment for McConnell.

Even before his victory - Paul was one of the leading voices of the Tea Party movement - known for its anti-big government, anti-tax, anti-establishment positions. Paul comes by his credentials honestly - his dad is Texas congressman and onetime GOP presidential candidate Ron Paul. And some of his ideas are pretty darn good. They include requiring Congress to balance the budget and limiting senators to 12 years in office.

The Democrats were quick to react to Paul's victory - saying he represents "the most extreme elements" of the Republican party. Paul's response? He says Democrats should "bring it on"... and is promising the Tea Party is here to quote "take our government back."

But, now that he's got everyone's attention... Paul is under intense scrutiny for some of the stuff he's said.. like having to explain his recent criticism of the 1964 Civil Rights Act.

But whatever questions there are - Rand Paul may one day be known as the person who put the Tea Party on the map. And with nearly one-third of Americans considering themselves Tea Party supporters, they could become a political force to reckon with.

Here’s my question to you: What does Rand Paul's victory in Kentucky mean for the future of the Tea Party?

END_OF_DOCUMENT_TOKEN_TO_BE_REPLACED

Does Mexico have a right to complain about Ariz. Immigration law? 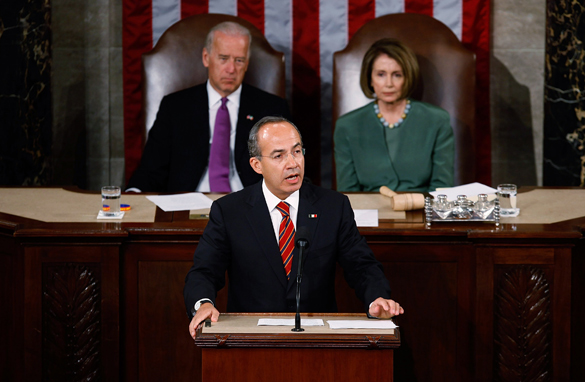 Mexican Pres. Felipe Calderon has a lot of nerve coming to this country and complaining about Arizona's immigration law - when all the state wants to do is protect itself against a flood of illegal immigrants from his country.

But instead - Calderon and Pres. Obama are both whining about the Arizona law. Calderon, who also took his message to a joint meeting of Congress, is calling the law discriminatory.

As for President Obama, he says he wants a federal fix to the immigration crisis in this country - which would have to come from the same federal government that has refused for decades to enforce laws already on the books. It's patently absurd. Pres. Obama complains about Arizona trying to do something about a problem he - Pres. Obama - and the federal government have created and choose to ignore.

And with all this criticism of Arizona coming from Presidents Obama and Calderon, the Justice Department, the Homeland Security department - our government officials, like Attorney General Eric Holder and Department of Homeland Security Secretary Janet Napolitano can't even be bothered to read the law they're criticizing.

If they did, they'd find out that parts of the law are word-for-word the same as the federal statutes on immigration. But the only thing that matters to the administration is pandering to Latinos ahead of the midterm elections.

Felipe Calderon should spend his time trying to create opportunities for his own citizens so they aren't driven by poverty and desperation to sneak into this country illegally. This country doesn't meddle in Mexico's internal affairs, Pres. calderon, and you ought to keep out of ours. Our border security is quite frankly none of your business.

Here’s my question to you: Does Mexico have a right to complain about Arizona's immigration law?