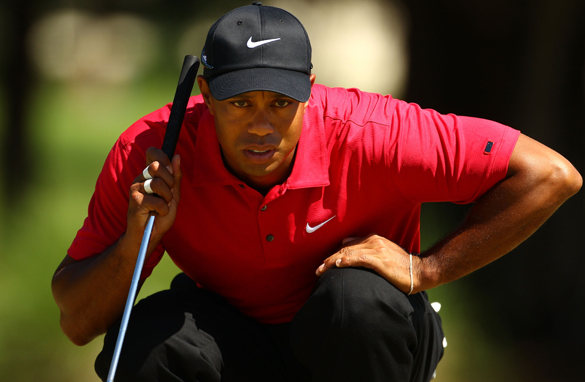 David writes:
It's really easy, Jack. He's so busy trying to win back endorsements, put on the "humbled" face for the media, and avoid further humiliation that frankly he isn't focused on the game. Behind the scenes he's probably explosive to anyone around him and I'd imagine that's why Haney left. We expected some breakthrough – that after rehab maybe he'd be even better than he was. Let's face it: he's a human being who is not infallible. He'll be back, but the scars are going to show.

Audrey writes:
You can learn that if you are a non-white person, you are held to a higher standard. You have your soul-mate Argentina visiting governor, your Louisiana politician whore house visitor, your call girl governor of New York, your having a love baby wannabe presidential candidate, your parents paying off the mistress in Nevada and none of these received the media tear-down that Tiger Woods got and he is only playing a "sport" – it's not likely that he has your economic and social welfare at stake.

Eddy writes:
At this point, Woods is a walking textbook of what not to do and how not to act. I don't believe for a minute he has conquered his "demons" because his arrogance is too great. There is no humility in this man and no joy (on or off the course). He seems ruled by control and compulsions, never a good combination.

Greg writes:
He's done. If there was ever a sport where one negative emotion or fear can mushroom-cloud into physical inabilities, it's golf. Every time he puts a tee in the ground or lines up a putt, Tiger knows the eyeballs and cameras are on him...but for much different reasons than they were for the previous 30 years. He enjoyed the pressure and the stares when he was a young phenom shocking the golf world. Now the attention is much more negative

Mike in Harrisburg, Pennsylvania writes:
Jack, Watching Tiger disgrace himself reminds me of an interview with a mega-lottery winner who said, "Giving a few hundred million dollars to a morally weak person is like pouring miracle grow on weeds."