President Obama is taking aim at the angry, anti-government rhetoric.
[cnn-photo-caption image=http://i2.cdn.turner.com/cnn/2010/images/05/03/art.protests.jpg caption="(GETTY IMAGES)"]
In a commencement speech, the president suggested this heated language is out-of-line and could be dangerous:

"At its worst, it can send signals to the most extreme elements of our society that perhaps violence is a justifiable response."

Just like it was for the colonists once upon a time when they got a bellyful of the English crown.

Peggy Noonan writes in the Wall Street Journal that the American people feel increasingly alienated from their government in Washington, which is ignoring public unrest and refusing to address big problems.

Noonan says that alienation often leads to deep animosity... which is in turn followed by quote "the breaking up of things."

Why is the public so steamed, you ask?

It's not whether we're angry - it's why do we continue to tolerate it.

Here’s my question to you: How do you feel about the rising level of public anger against the federal government?

END_OF_DOCUMENT_TOKEN_TO_BE_REPLACED

Any reason to take Iran seriously on nuclear weapons? 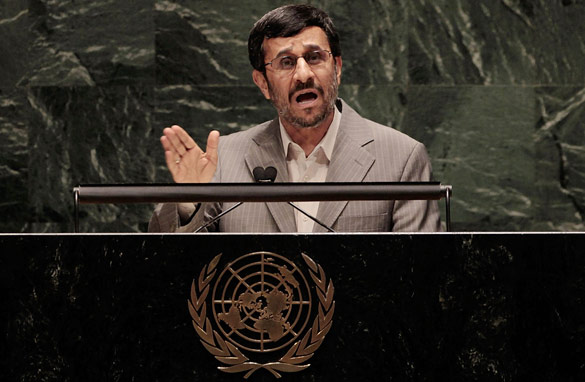 The circus is in town at the United Nations today. The president of Iran is here in New York for an international summit on nuclear non-proliferation.

Delegates from the U.S., England and France walked out of the general assembly... as Mahmoud Ahmadinejad blasted America and Israel for possessing nuclear weapons. Ahmadinejad says countries that threaten to use atomic weapons should be punished - a direct reference to the Obama administration's new nuclear strategy.

The White House calls Ahmadinejad's speech predictable and full of "wild accusations"... and the UN is blaming Ahmadinejad for the standoff over its nuclear program.

Iran continues to insist it is enriching uranium for civilian energy. The west says they're developing nuclear weapons.

Ahmadinejad comes from a country that lives in its own world... ignoring reality and science - and blaming natural disasters on promiscuous women.

Another senior government official says prayers and pleas for forgiveness are the best way to "repel" earthquakes.

The latest absurdity comes from the Iranian police who say they will put women with suntans in jail. This is all part of an effort to crack down on quote "social misbehavior" that violates Islamic laws.

We should be talking to these people about the origin of fire or why wheels are round.

Here’s my question to you: Is there any reason to take Iran seriously in a discussion on nuclear weapons?