Both sides insist the bond is unshakable... but it's pretty hard to ignore the rising tensions between the U.S. and Israel these days.
[cnn-photo-caption image=http://i2.cdn.turner.com/cnn/2010/images/04/16/art.netanyahu.biden.jpg caption="Israeli Prime Minister Benjamin Netanyahu with VP Joe Biden in March. Netanyahu met with Pres. Obama later that day."]
Now Pres. Obama is signaling a shift in American policy in the Middle East... by declaring that the Israeli-Palestinian conflict is a "vital national security interest of the United States."

He's drawing a direct link here between what's happening in Israel and the safety of U.S. troops fighting Islamic extremists in the region.

The New York Times reports the president's shift in tone reflects a debate within the administration over how to "best balance support for Israel against other American interests."

It's no secret that the administration has been frustrated with a lack of progress in peace talks; and that they were not happy with Israel's recent snub of announcing a massive new Jewish housing project while Vice President Biden was in Israel.

That was reportedly followed by a tense meeting between the president and Prime Minister Benjamin Netanyahu in Washington.

Israel's right-wing government is concerned that the U.S. will try to push through a peace deal on its own, meaning they'd have to give up things they don't want to; and that the Palestinians might declare statehood unilaterally as early as next year.

To that end - Israel has spent much of the last week highlighting threats it faces in the region... from a potentially nuclear-armed Iran to charges that Syria is providing weapons to Hezbollah guerillas in Lebanon.

Syria says it's not true.

Here’s my question to you: How should the U.S. change its policy toward Israel?

END_OF_DOCUMENT_TOKEN_TO_BE_REPLACED

Do you hate the government? 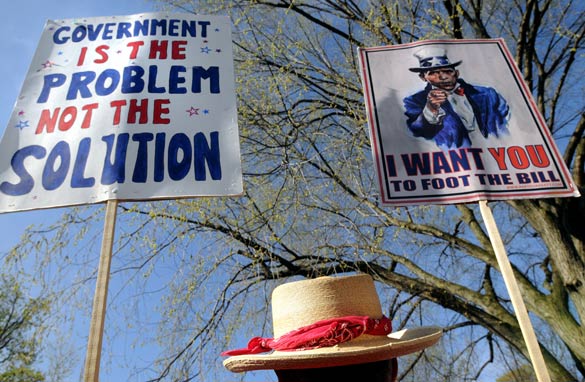 That's according to a piece in the Washington Examiner by political editor Chris Stirewalt:

"After two wars, a $12 trillion debt, a financial crisis and the most politically tone-deaf president in modern history, Americans may have finally given up on big government."

Stirewalt writes how three years ago the Republican establishment pretty much disregarded presidential candidate Ron Paul... but not anymore. The Texas congressman is gaining some serious support - along with his son, Rand, an ophthalmologist with no political experience, who may have a real shot at a Senate seat in Kentucky.

Stirewalt suggests that the American people are sick of watching everyone from the big banks to united auto workers drain the U.S. treasury. He believes that both Democrats and Republicans have misjudged the mood of the public.

It is of course the Tea Party movement that represents much of this angst and anger at big government, record spending and deficits... and higher taxes. Last year, the Tea Parties caught nearly everyone by surprise... but now the two major political parties and the media are tuned in.

But, Stirewalt says the real meaning of these protests isn't about a politician like Ron Paul or even the activists marching with "don't tread on me" flags... instead it's about the people at home who might agree with their message... and there are potentially lots and lots of them - with polls showing that nearly one-third of Americans consider themselves Tea Party supporters.

Here’s my question to you: Do you hate the government?