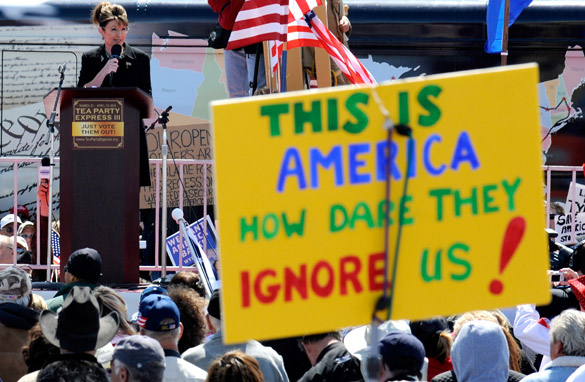 It's about time. The American people may have finally had it with both Democrats and Republicans... and might just start seriously considering another option.

A new USA Today/Gallup poll shows for the first time, the two major political parties are viewed unfavorably by most Americans. What's more - the Tea Party movement's favorable rating of 37 percent is nearly as high as the 41 percent for Democrats and 42 percent for Republicans.

This means the anti-tax, anti-big government movement that's only about one year old is ranking almost as high as these political machines that have been around for a couple hundred years.

The same poll shows 28 percent of all adults call themselves supporters of the Tea Party... more than a quarter of Americans is nothing to sneeze at. When it comes to their politics, Tea Party supporters mostly lean Republican and conservative. They're also more likely to be male and less likely to be poor.

But in many other areas, Tea Partiers are representative of the general public - including their age, education, employment status and race. And whether it ultimately comes from the Tea Party or not, it could finally mean some real competition for the 2 major parties, which have long since ceased to give much of a damn about American citizens.

Meanwhile an article in the British Newspaper "The Telegraph" suggests that with Americans so disgusted with their politicians, a real outsider is needed in the White House. They say no one stands out like General David Petraeus, head of U.S. Central Command.

Petraeus emphatically denies any interest in being president... but then again, so have lots and lots of other future candidates.

Here’s my question to you: What does it mean when the Tea Party movement has a favorable rating almost as high as the Democrats and Republicans?

Driscoll writes:
Finally the electorate smells the rotting stench emanating from that cesspool called Washington, D.C. The ruling class has not listened to what is important to the people (jobs are #1). They are disgusted with the methods used to ram this health care reform down our throats.

Sam writes:
It means that the U.S. is in trouble as its citizens support a novelty of simpletons rather than substance.

Chris in Philadelphia writes:
Until they find a mouthpiece other than Caribou Barbie, very little. They need electable candidates, and if they find a couple of those it could be really bad for Republicans and Democrats.

Ryan writes:
The Tea Party doesn't have any real solutions to solving our problems. All they have is their anger. We need a lot more than sound bites and fury to fix things. Show me some substance.

Jim in Chicago writes:
It's sad when a one-dimensional political party achieves popular parity with the more established parties, but that does not equate to success. The Tea Party is not so much rising in the polls as the Democrats and Republicans are falling. The Tea Party is presently filling the void, the vacuum, from the two major parties' loss of faith from the general electorate.

Tom in Texas writes:
Hopefully, the Tea Party will split the GOP down the middle. You may think they are the "mad-as hell-not-gonna-take-it- anymore" populist movement of the future. I look at those crowds (and their signs) and see ignorant rednecks who do not like the fact that their President is a black man. Period.

D. in Atlanta writes:
It means that when someone said, "don't worry, things could be worse," they were right!