Would Church benefit from forcing the pope out? 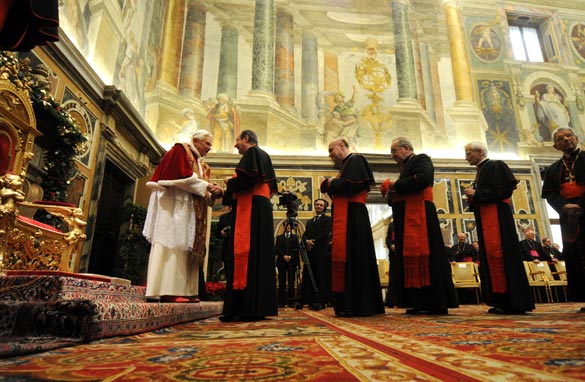 Pope Benedict XVI is facing a firestorm from critics as to how much he knew about the Vatican's latest sex abuse scandal. (PHOTO CREDIT: GETTY IMAGES)

In the middle of Holy Week and with Easter right around the corner - the Catholic Church is launching a massive P-R blitz to defend the Pope's role in the growing sex abuse scandal. Instead of contrition and asking for forgiveness, get a load of the following:

The Vatican is pushing back against the idea that Pope Benedict the 16th should take personal responsibility for the child abuse scandal... and it's defending his management of abuse cases. Some Catholic officials are suggesting it was the previous Pope, John Paul the Second, who blocked investigations into pedophile priests.

And the Vatican is planning a legal defense against an American lawsuit... that would force the Pope to answer questions under oath. The A-P reports court documents related to a Kentucky case show Vatican lawyers plan to argue the Pope has immunity as head of state and that American bishops who oversaw abusive priests weren't employees of the Vatican.

In the Pope's native Germany, the church has opened a hotline for victims to report alleged crimes. Critics are outraged... saying that victims should tell the authorities first, not the church.... They have a point, considering that the Catholic Church has done virtually nothing except shuffle abusive priests around and cover-up the scandal for decades. Including a priest who molested 200 deaf boys. The church did nothing.

Meanwhile a new Gallup poll shows Pope Benedict's favorable rating has dropped to 40 percent in the U.S–its lowest level ever.... that's down from 63% two years ago. The Pope's image has declined about equally among Catholics and non-Catholics.

Here’s my question to you: Would the Catholic Church benefit from forcing Pope Benedict out?

END_OF_DOCUMENT_TOKEN_TO_BE_REPLACED

The White House is backing a race-based admissions policy at one public university.

The Wall Street Journal reports that the Obama administration has asked a federal appeals court to uphold the system at the University of Texas at Austin.

The case was brought by two white students who were rejected for admission at the Austin campus. 75 percent of students are admitted on academic grounds if they rank in the top 10% of their high school class... but the rest are admitted through a so-called "holistic" evaluation that takes factors like race or ethnic identity into account.

These white students say the admissions policy violated the federal civil rights law. So far, a district judge has rejected their claim... but it's possible this thing could wind up before the Supreme Court.

You see, this case actually tests a 2003 high court ruling that upheld a similar policy at the University of Michigan law school. At the time, the court said the school had a "compelling interest in attaining a diverse student body." It prohibited "outright racial balancing"... but said race could be a "plus" factor in order to build a "critical mass" of minority students.

But since then, the Supreme Court has become more conservative and critics of race-based admissions are hoping that the Texas case could be the way to change the policy.

For its part, the university insists its policy is critical in achieving the "diverse institution" its looking for.

Here’s my question to you: Are race-based admissions a good idea at public colleges and universities?

Interested to know which ones made it on air?
END_OF_DOCUMENT_TOKEN_TO_BE_REPLACED