What government services could you get by with less of? 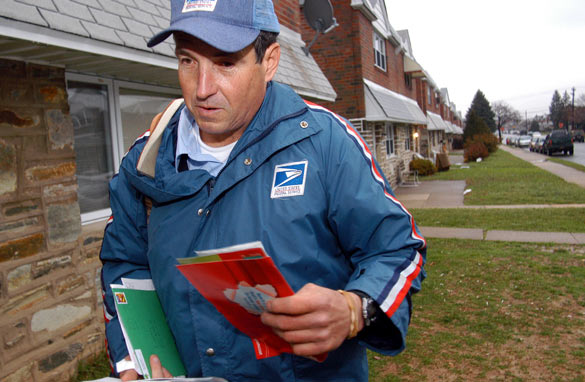 Big government costs big money, and in the recession, all levels of government are looking for ways to make budget cuts. On the national level, one of the big ones is the U.S. Postal Service, which is looking to move to a five-day delivery week.

Tomorrow, the USPS will submit a proposal to its regulatory board that would limit mail delivery and collection to Monday through Friday beginning early next year. However, post offices that are now open on Saturdays would stay open and express mail delivery would still be available seven days a week.

The postal service estimates the delivery change would save more than $3 billion a year which is a step in the right direction, considering it's on track to lose as much as $7 billion this year.

Then there are the states facing huge deficits. They are also under pressure to make some significant cuts.

In Illinois, lawmakers want to chop the school week to four days.

Supporters say that students would still have to complete the same number of hours per school year. They suggest a lot of money could be saved by not using heat, lights or cleaning the school buildings along with using school bus service for fewer days.

But critics say that students who receive free lunch would miss a day and a longer school-day means after-school activities would start even later.

Plus, there's a big question of what happens when kids are home an extra day but their parents are at work.

Here’s my question to you:What government services could you get by with less of?

Dave writes:
Cut USPS to five day delivery for now. 10 years from now, I don't see we will need USPS at all, with the internet and electronic delivery of most documents. If you need to send something "real," then use FedEx or UPS. Medicare and Social Security becomes means tested, and ages of eligibility moved out. Cut military spending. It is, I think, the largest discretionary part of the federal budget. We spend so much more than the rest of the world.

Jim in Michigan writes:
Eliminate the IRS. Go with a VAT tax, that way there are no loop holes, everybody contributes to the tax base and there is no cheating on your taxes you pay as you go. Reduce entitlement programs to a level that helps the less fortunate and provides assistance but does not destroy the incentive to work. We cannot penalize people for working and we need to encourage those adverse to it to start.

Steve in Clifton, Virginia writes:
I could certainly get by without many aspects of the so-called Patriot Act where snooping and secret telecom messages are recorded and spying on U.S. citizens occurs, and a tad less of the military budgeting and spending on outdated military weapons that each service has a variation of.

Harold in Anchorage, Alaska writes:
The military; I don't see the point to thousands of troops stationed all over the world. Or being used in nation-building. Our nation needs building, too.

Rahn writes:
The National Endowment for the Arts, The National Endowment for the Humanities, The Corporation for Public Broadcasting, the funding for all those "Census 2010" commercials. I could go on. Bottom line: This country has to distinguish what it needs from what it wants. If we can't do that, we will never get government spending under control.