Should gov't be able to force you to have insurance?

Health care reform is now the law of the land... and part of that law is that everyone has to have insurance. Those who don't could be fined.
[cnn-photo-caption image=http://i2.cdn.turner.com/cnn/2010/images/03/24/art.surgeon.jpg caption=""]
The law creates penalties in the tax code as an incentive to buy insurance...

For example, by 2014 - an adult who doesn't have insurance would have to pay $95 or one-percent of their income... whichever is more.

The penalty is only enacted if you go more than three months a year without health insurance; and it doesn't apply to everyone.

Some people are exempt - including those at the lowest income levels, people in prison or objecting on religious grounds, or members of Native American tribes.

Massachusetts has had a similar penalty system tied to its health insurance system for a few years. In 2008 - the state fined about 1.5 percent of all taxpayers.

Critics, including some Republicans, say this system means the Internal Revenue System will need to hire many new agents, and that the IRS will be "more deeply involved in our lives than ever before."

But Democrats say the IRS has been able to implement other new taxes without major problems; and President Obama insists that the only way to make insurers cover everyone is for everyone to be required to buy health insurance.

Here’s my question to you: Should the government be able to force you to have insurance?

END_OF_DOCUMENT_TOKEN_TO_BE_REPLACED

Why vote same politicians into office if we disapprove of them? 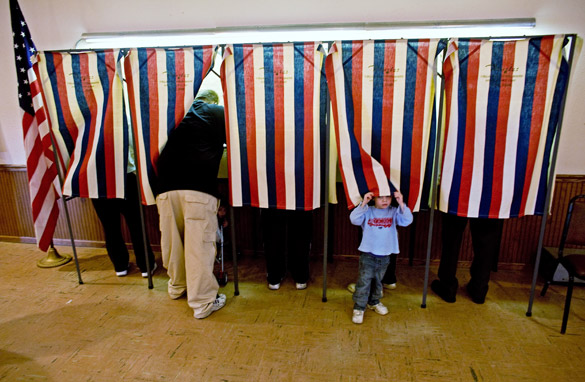 Here's yet another sign of what low regard we hold Congress in:

A new CNN/Opinion Research Corporation Poll shows that just about half of those surveyed say that most Republicans and most Democrats in Congress are unethical.

The poll also shows only one-third of Americans approve of how the congressional leaders have handled their jobs.

Another poll by CBS news shows even worse results for party leaders Nancy Pelosi and Harry Reid. Only 11 percent have a favorable view of Pelosi; and eight percent for Reid. And both these polls were taken before the health care vote.

All this seems to suggest that maybe this will be the year to vote incumbents out of office. Even though history strongly suggests otherwise.

Another survey we recently told you about in the Cafferty File asked: If there were a single line on the ballot that would let you vote out every single member of Congress - including your own representative - would you do it? Half of the people surveyed say "yes."

But we never do. Insanity.

Here’s my question to you: Why do Americans keep voting the same politicians into office if we disapprove of the job they're doing?