What would you like to see Congress do next?

So whaddya got for an encore? And do we have the stomach for it?
[cnn-photo-caption image=http://i2.cdn.turner.com/cnn/2010/images/03/22/art.capitol.jpg caption="Lights on at the Capitol as the House of Representatives worked during a rare Sunday session last night. "]
If you liken the passage of health care reform to a birth, the pregnancy was difficult and the labor and delivery were worse.

But - now that the health care baby is here, what's next? There's no shortage of issues facing this country that demand attention from our government.

Start with immigration reform. Tens of thousands of demonstrators rallied in Washington this weekend, frustrated with the lack of action so far. The president promised to make immigration overhaul a top priority in his first year... but we all know what happened there.

It's an issue that has defied resolution. Congress failed to agree on immigration reform under President Bush... and with the highly partisan atmosphere in Washington today, I wouldn't bet they'll have any more luck this time.

There's the economy... with nearly 10 percent unemployment, bringing the jobs back is issue one on millions of Americans' minds. There are also skyrocketing deficits and our more than $12 trillion national debt - that we are unceremoniously dumping on future generations.

Add in reform of the financial institutions, no coherent energy policy, education, and gays in the military… the list is long.

Not to mention a whole basket of foreign problem including two wars, nuclear standoffs with Iran and North Korea and a disintegrating situation between Israelis and Palestinians.

END_OF_DOCUMENT_TOKEN_TO_BE_REPLACED

What will passing health care mean for Pres. Obama? 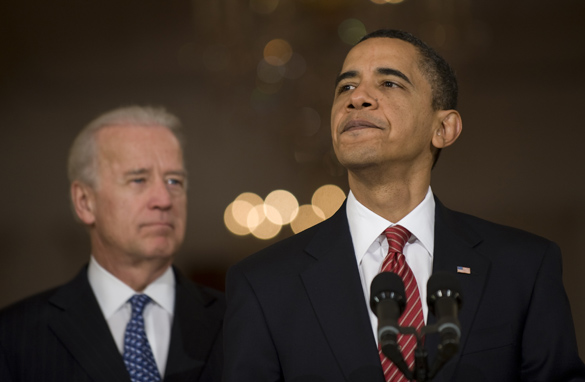 Pres. Obama delivers a statement to the nation following the vote in the House of Representatives on health care reform from the East Room of the White House. (PHOTO CREDIT: JIM WATSON/AFP/GETTY IMAGES)

Perhaps gloating just a little, in the wake of the passage of health care reform yesterday, President Obama said, "This is what change looks like."

There were serious doubts that he could pull it off... but after more than a year of an often bitter debate, the health care sausage is made.

Whether you support it or not - this bill is a big deal... with some likening it to the passage of Social Security and Medicare.

David Sanger stated in the New York Times, "Mr. Obama proved he was willing to fight for something that moved him to his core... he showed that when he was finally committed to throwing all his political capital onto the table, he could win, if by the narrowest of margins."

The president succeeded where many others failed... but the real question is, at what cost?

For starters - the president has likely lost for good, his campaign promises of a post-partisan Washington.

Consider that for the first time in modern history a major bill passed without one single Republican vote. Even LBJ got almost half of House Republicans to sign on to Medicare in 1965.

Some top Republicans are already calling for a repeal of health care reform. Former House Speaker Newt Gingrich says the legislation "will not stand"... and that this is only the "beginning of the fight."

Gingrich insists the 2010 and 2012 elections will be an opportunity to "save America from a left-wing machine of unparalleled corruption, arrogance and cynicism."

For his part, the president acknowledges he doesn't know what the political future will bring - but insists the legislation is "a victory for common sense."

Here’s my question to you: What will passing health care reform mean for President Obama?