Tipping health care vote one way or the other?

It's "do or die" time - when it comes to the president's signature issue of health care reform.
[cnn-photo-caption image=http://i2.cdn.turner.com/cnn/2010/images/03/19/art.pelosi.jpg caption="House Speaker Pelosi walks through the Capitol. The House is expected to cast its verdict on a Senate bill Sunday. A 'yes' vote would enshrine into law comprehensive health care reform, bringing coverage to 32 million Americans who currently lack insurance."]
After more than a year of debate, the showdown is set for Sunday when the House is expected to vote.

In the meantime - it's not clear if the Democrats have reached the magic number of votes needed to pass this thing. Both President Obama and House Speaker Nancy Pelosi are meeting one-by-one with lawmakers on the fence, trying to turn "no" votes to "yes." It's political arm-twisting at its finest....

But it's not all good news for the Democratic leadership... with some caucus members showing signs of defecting.... including those not satisfied with the abortion language.

Meanwhile the stakes couldn't be much higher for President Obama. The future of health care reform could play a large role in the future of his presidency.

Which is probably why he's postponed his trip to Indonesia and Australia until June. But some are criticizing the president's decision to cancel the trip for now, and stay in Washington for the health care vote.

Here’s my question to you: What will it take to tip the health care reform vote one way or the other?

END_OF_DOCUMENT_TOKEN_TO_BE_REPLACED 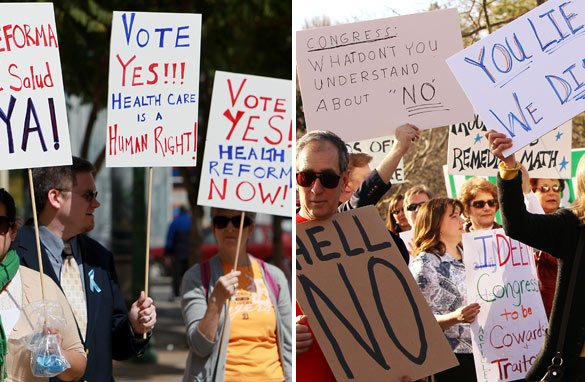 On the eve of that historic health care vote - the American people are fed up with Washington.

A new Gallup poll shows President Obama with the worst job approval rating of his presidency. 46 percent approve of the job he's doing - while 48 percent disapprove.

As for Congress - Americans think even less of that bunch; only 16 approve - which is close to an all-time low - and a whopping 80 percent disapprove.

And, There are more signs that incumbents better watch their backs come November.

A Wall Street Journal/NBC News poll asks: If there were a line on the ballot that would let you vote out every single member of Congress - including your own representative - would you do it? Half of the people surveyed say "yes."

As a piece in the Journal suggests: "Congress always looks worst when it's in the middle of making the sausage known as legislation... By contrast, lawmakers usually look better when the sausage is finished, packaged and displayed on the store shelf."

What's unclear is whether the American people will look more favorably on the president and Congress if - and it's still a big "if" - they can make the sausage, also known as health care reform.

Democratic Congressman Tom Perriello of Virginia summed up the way a lot of people feel about our lawmakers when he put it this way: "If you don't tie our hands, we will keep stealing." He was talking about how the only way for Congress to be fiscally responsible is to give them no choice.

Here’s my question to you: What does it say that on the eve of the health care vote, President Obama's approval rating in one poll is the lowest ever and Congress' approval rating is nearing an all-time low?