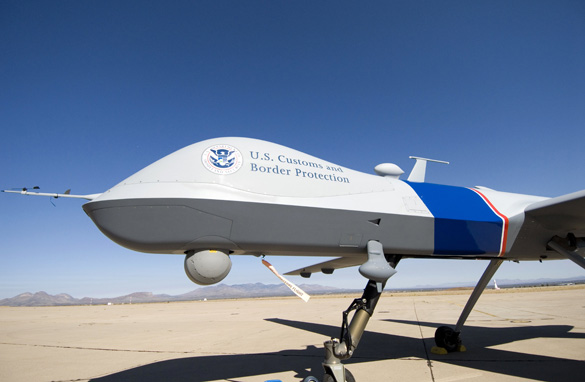 The MQ-9 Predator aircraft would patrol the southern border of the U.S. in order to stop the illegal entry of thousands of Mexican nationals and drug runners. (PHOTO CREDIT: GETTY IMAGES)

Despite a deepening crisis along the U.S. border with Mexico, our government refuses to get serious about security.

Texas Governor Rick Perry has asked the federal government for unarmed predator drones to patrol the border. It's a request he's made before, but is now renewing after three workers at the U.S. consulate in Juarez were murdered.

Perry asks: "How many Americans will have to die before our federal government takes serious action along the Texas-Mexico border?"

Chances are Texas will have to wait. Some more. Homeland Security Secretary Janet Napolitano says she's considering Perry's request, but insists the government is constantly watching what's happening at the border. Watching is about the extent of it.

Napolitano also announced she's holding up funding for plans to build a virtual fence along the border. She says it's because the system of sensors and cameras has had many problems, including cost over-runs. So Napolitano wants a review to be completed first.

Exactly what we need - another review of border security. The government can continue to do nothing while drug-cartel violence along the border keeps getting worse.

Texas recently issued a warning to parents not to allow their children to go to Mexican border towns on spring break. And the State Department has put out a travel warning to delay visits to certain parts of Mexico. Maybe it's time for Americans to boycott all trips to Mexico - spend our vacation money somewhere else..

More than 4,000 people have been killed in the border city of Juarez in the last two years.

Here’s my question to you: Should drones be used to patrol the U.S. border with Mexico?

Joe in Fairfield Bay, Arkansas writes:
I guess since I am shortly going to be required to pay for health insurance for anyone who gets into the country illegally, the drones might actually turn into a cost effective military product. Imagine that.

Ed writes:
We should be using everything at our disposal to protect our border. This includes: drones, blimps, fences, satellites, agents, radar and cameras. Why have a Homeland Security agency and all it costs if it fails to seal our borders?

Pete in Georgia writes:
Patrol? For what? Everybody in America knows what is going on: the government knows exactly WHERE the thousands of illegals are pouring in weekly. The problem is the do-nothing politicians who refuse to get tough and put an end to it. All the surveillance in the world is just more of an insult to every decent American's intelligence.

Ben writes:
Yes! We need to protect our country with everything that we have. We should even send limited number of troops on 30-day rotations to our borders.

Deborah in Colorado writes:
Unarmed drones are better than nothing, but armed troops are better. Our government needs to stop "playing nice" with drug cartels and gangs. It's time we took control of our borders and if Mexicans don't like it, they can go home.

Riley in Charleston, West Virginia writes:
No drones at the border. Too much money, not enough return. That flood will continue till they can't get work, housing, education, or medical. How about a human chain of unemployed Americans?