Why does divorce make men more suicidal than women?

It's no secret divorces can be ugly, messy and uncomfortable in so many ways... but now there's research that suggests divorce is also one of the top reasons for suicide among men.
[cnn-photo-caption image=http://i2.cdn.turner.com/cnn/2010/images/03/11/art.depression.jpg caption=""]
AOL News reports that the stress and sadness associated with divorce take a much tougher toll on men than women.

Experts say suicide rates are higher among divorced men - and lowest among those who are still married. Single men fall in between.

One sociologist who studies family structure and suicide rates says divorced men are almost 40 percent more likely to commit suicide than those who are still married. That number jumps to 50 percent for a man who is widowed.

Yet for women there's a statistically insignificant difference when it comes to the risk for suicide among those who are married, divorced or widowed.

Some think it's because marriage provides a support system that men rely on much more than women. There are also studies that show married men take fewer risks and are healthier - less likely to smoke, drink or use drugs.

Another reason why women might be less suicidal is because of the children. Women often remain the primary caretakers for kids after divorce; and research shows that for every additional child in a home, the adult is less and less likely to commit suicide.

Overall - men in this country are four times more likely than women to take their own lives.

Here’s my question to you: Why does divorce make men more suicidal than women?

END_OF_DOCUMENT_TOKEN_TO_BE_REPLACED

Walmart selling black Barbies for less than white ones? 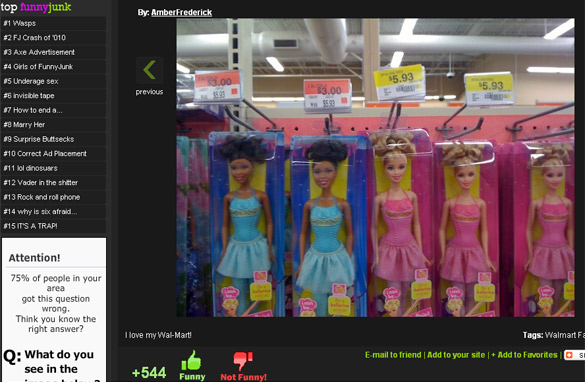 Walmart is under fire for selling black Barbie dolls at nearly half the price of white ones - in at least one store.

These dolls are on the shelf right next to Ballerina Teresa - the black doll - with a reduced price of $3.

The photo was apparently taken at a Louisiana Walmart store.

Walmart says this was a business decision... telling ABC News that the price reduction was meant to clear shelf space for new spring inventory. They say many items are marked for clearance, adding "both are great dolls... one was marked down due to its lower sales to hopefully increase purchase from customers."

That reasoning works for lots and lots of products, but maybe not in this case. Not everything can always come down to a business decision.

Critics charge Walmart should have been more sensitive when it came to these dolls - they say that even if it's not intentional, the chain is sending a message that "we value blackness less than whiteness."

One sociologist says that when white dolls sell more than black dolls - it is because black parents are more likely than white parents to buy a doll of a different race for their kids. She suggests Walmart should have kept the dolls at the same price in order not to reinforce any "ugly inequalities."

Here’s my question to you: What message does it send when Walmart sells black Barbie dolls for less than white ones?

END_OF_DOCUMENT_TOKEN_TO_BE_REPLACED

"The time for talk is over. It's time to vote."

So says President Barack Obama about Health care reform, which has consumed almost the entire first year of his presidency.
[cnn-photo-caption image=http://i2.cdn.turner.com/cnn/2010/images/03/11/art.obama.jpg caption=""]
As this thing moves toward some sort of resolution - one way or another - it seems it will leave an indelible mark on Mr. Obama's legacy.

After nearly a year of debates, town hall meetings and angry Tea Partiers, closed-door meetings in Washington, thousands and thousands of pages of legislation, and a televised day-long summit - it's not clear if the Democrats have the votes to turn the president's signature issue into law.

Even though Democrats are poised to use a procedure called reconciliation in the Senate - where they need only a simple majority - it's far from a done deal. Over in the House - Nancy Pelosi may not have the necessary votes either, with some Democrats worried about abortion and others just worried about getting re-elected.

Critics say President Obama left too much power in the hands of Congress; he didn't step in early enough and assert his leadership. Instead he waited until the bill had become a mangled mess with everybody's fingerprints on it, except his.

Now the president is out there nearly every day giving campaign-style speeches... but it might be too little too late. A large majority of Americans don't want the current bill.

There are still more than two years until the president would be up for re-election; and it's worth pointing out that although Bill Clinton failed to pass health care reform during his first term... he went on to be re-elected.

Here’s my question to you: How will the fate of the health care reform bill ultimately affect Pres. Obama's legacy?