There's a deafening silence coming from the Vatican.

When Pope Benedict the 16th recently met with Catholic leaders from Uganda, he made not a single mention of the nation's medieval-sounding anti-gay bill.

Something nicknamed "kill the gays" legislation is making its way through Uganda's parliament. It calls for life imprisonment for homosexuals - and in some cases, even execution.

People around the world have protested the bill, with Western nations and human rights groups expressing outrage. Pres. Obama has called it "odious" and Secretary of State Hillary Clinton says she's called Uganda's president to express her "strongest concerns."

According to the UN, the law would prohibit sex between people of the same sex and wouldn't recognize homosexual relations as an acceptable lifestyle. It even carries prison sentences of up to three years for anyone who doesn't report a gay person, not to mention life in prison, or potentially the death penalty, for homosexuals.

But the Pope said not a word about any of this, instead calling on Uganda's bishops to encourage catholic’s to "appreciate fully the sacrament of marriage."

It's possible the Pope didn't touch the issue in his wide-ranging speech because the bishops asked him not to, or because of concerns that his weighing in could backfire and lead to the passage of the bill.

Baloney. The Pope is supposed to be the moral authority for Catholics around the world. His counsel is sought and his office respected by people and governments both inside and outside the church. Compassion for human rights and the sanctity of life are supposed to be corner stones of Catholicism.

Even the archbishop of Uganda's capital says the bill "does not pass a test of a Christian caring approach to this issue." There's an understatement.

Here’s my question to you: What’s the message if the Pope remains silent on Uganda’s “kill the gays” bill?

Interested to know which ones made it on air?
END_OF_DOCUMENT_TOKEN_TO_BE_REPLACED

They're supposed to be the golden years, but retirement is becoming more and more difficult for millions of Americans.

A new survey shows that the percentage of workers with virtually no retirement savings grew for the third year in a row.

Forty-three percent of those surveyed say they have less than ten thousand dollars saved for retirement, excluding the value of homes and pension plans.

The annual Retirement Confidence Survey also finds that 27 percent of workers have less than one thousand dollars in retirement savings.

It's a glaring picture of the decline in our quality of life. Only 16 percent of Americans say they're confident they can save enough for a comfortable retirement - that's the second lowest percentage in the 20-year history of the poll.

Job losses and mortgage problems are partly to blame here - but not entirely. Some people weren't saving even when the economy was stronger. And, a lot of people don't want to think about retirement - until it's too late.

For many Americans, the new reality is working longer and retiring later in life. Financial planners say that retirement savings - including Social Security and pension - should provide about 80 percent of your pre-retirement income. For most people – that means they should be saving close to 10 percent of their salary.

But with millions unemployed, rising care health costs and decreasing home values - among other things - saving that much just isn't possible.

Here’s my question to you: What does it mean that 43 percent of Americans have less than $10,000 in savings for retirement?

Interested to know which ones made it on air?
END_OF_DOCUMENT_TOKEN_TO_BE_REPLACED 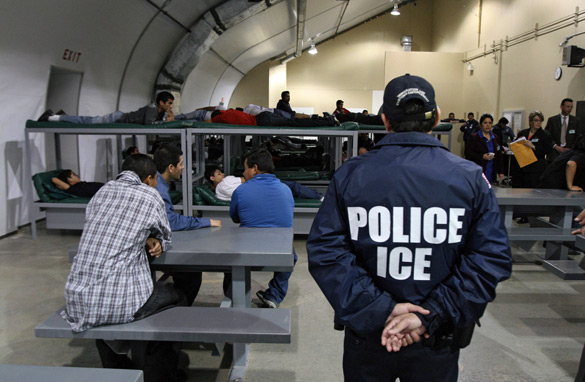 The Senate has begun work on an immigration bill and at the center of this new plan is a controversial requirement for all American workers to get identification cards.

It's meant to prevent employers from hiring illegal immigrants. Right. If you think the corporations that make huge profits on the backs of an illegal alien workforce are going to let something like that get through, think again.

Under the plan - all legal workers, including citizens and immigrants, would have to get an ID card that includes biometric information like fingerprints.

The Wall Street Journal reports the card would be phased in among all workers, including teens; and among all employers, starting with industries that rely on an illegal immigrant workforce. Now there's an idea.

Supporters say such a worker ID card would be a way to guarantee illegal immigrants don't come here for jobs because they wouldn't be able to get them.

But critics worry about violating people's privacy. They say such worker ID cards could wind up being a type of national ID card that would allow the government to track everything people do - from working to voting to traveling. Many European countries require everyone to carry ID cards.

This immigration bill would also offer a pathway to citizenship for the estimated 11 million illegal immigrants already living here, but they'd have to register, pay taxes, pay a fine and wait in line.

Amnesty with some inconvenience attached. And for many Americans, it's a nonstarter. Anything resembling amnesty won't cut it.

Here’s my question to you: When it comes to immigration reform, are worker ID cards a good idea?

Interested to know which ones made it on air?
END_OF_DOCUMENT_TOKEN_TO_BE_REPLACED