Should Dems try to ram health care reform through with 51 votes? 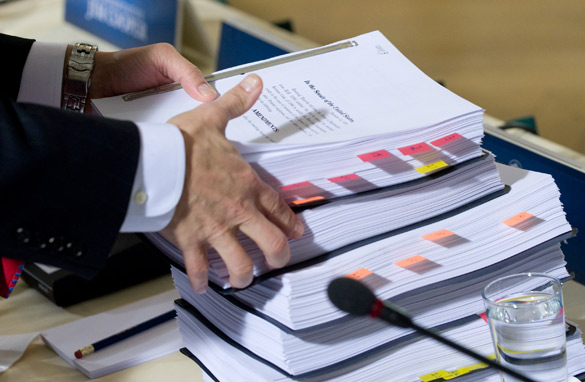 House Minority Whip Eric Cantor picks up a copy of the Senate's health care reform plan prior to the start of a bipartisan meeting hosted by Pres. Obama. (PHOTO CREDIT: SAUL LOEB/AFP/GETTY IMAGES)

The Democrats are taking a hard look at using a 51-vote shortcut in the Senate to ram a health care bill through. It's a procedure known as reconciliation and it is supposed to be used only for legislation that affects taxes and the deficit.

Democrats are trying to figure out how the complicated process could work, and whether they even have enough votes in both houses to make it happen.

The plan would be for the House to pass the bill that's already gone through the Senate, and then for both houses to pass a package of changes that mirror the president's plan. Under those rules, the Democrats would only need 51 votes in the Senate.

But there are problems. Plenty of them...

For starters, Senate Democrats aren't even sure if they would have the 51-vote simple majority needed. They could also face a big-time backlash from the public for trying to jam this thing though.

Over in the House - Democrats may not have enough votes either. The one Republican who voted for the health care bill last time already says he'll vote "no," not to mention Democrats facing tough re-election races who may change their votes to "no."

And, abortion might be the biggest obstacle of all. There could be as many as a dozen house Democrats who'd vote against the senate bill because they say it's not strict enough in making sure tax money doesn't pay for abortions.

Here’s my question to you: Should Democrats try to ram health care reform through the Senate with 51 votes?

It's been more than two years since I addressed the subject of our broken government on CNN - and in that time, things have gone from bad to worse.

Tonight at 7 p.m. ET, you're cordially invited to join me for an hour guaranteed to depress you. Not only is the government broken, the questions about whether it can be fixed are growing larger every day.

Just this week we've talked about:

It's a long list, but if you've got an hour to spare tonight, I hope you'll join me because if there's any chance at all to stop this country from circling the drain, it's going to be the average American citizen who ultimately makes it happen.

The Show airs immediately following this broadcast at 7 p.m. ET

Here’s my question to you: What do you consider the single most serious problem facing the U.S. today?

END_OF_DOCUMENT_TOKEN_TO_BE_REPLACED

Jack will take an in-depth look at the many ways our government is broken and whether it’s too late to fix it.