How seriously do you take the tea party movement? 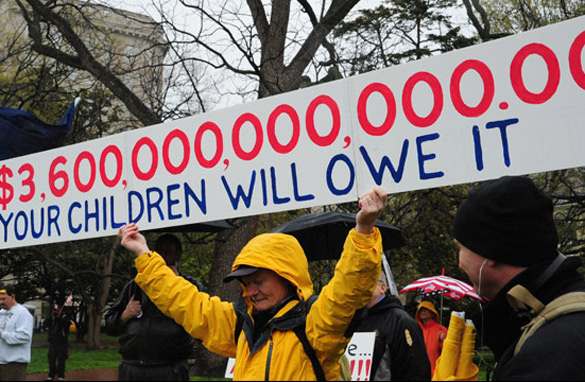 Tea Party activists are generally on the right end of the political spectrum, being fiscally and socially conservative. (PHOTO CREDIT: GETTY IMAGES)

The one in Boston more than 200 years ago was amazing. Now there's another tea party brewing…

Hundreds of mostly conservative and independent activists are descending on Nashville, Tennessee for the first-ever "National Tea party Convention."

The movement started in small towns and large cities across the country - with people protesting against President Obama's economic and health care policies. It's grown from dozens to hundreds of loosely-linked grass-roots groups. Tea partiers have varying political views, although they generally agree on fiscal conservatism and the idea that the federal government has become too powerful.

Although the tea party movement has no national organization and no leader - it has quickly grown in size and is starting to smell a little like a political party.

Organizers say this weekend's convention is sold out, with about 600 attendees paying $550 to attend.

Some of the sessions planned include "Technology in the Tea Party Movement,"... "Defeating Liberalism via the Primary Process" and "Why Christians Must Engage."

Sarah Palin, the keynote speaker, is reportedly being paid $100,000 - although she insists she won't "benefit financially" from the event. Palin says anything she makes from her appearance will go "right back to the cause" - whatever that means.

But other high-profile speakers and activist groups have dropped out. Critics say the average tea party-goer can't afford the tab for a "lobster and steak dinner in a fancy hotel," they say it sounds more like a "regular Republican fundraiser" than like a tea party.

Here’s my question to you: How seriously do you take the tea party movement?

Jeff from Houston writes:
Very seriously. The Bush Regime taught me that anything based in right-wing extremism can get a foothold in this country, and that America still despises anything resembling an intellectual debate. Yes, Jack, a mass of gorillas with clubs and ballots do get my attention. Especially the ones who have developed language skills like "you betcha."

Dan from Chantilly, Virginia writes:
I keep hearing that the majority of tea partiers are independents who are tired of government spending, but the facts just aren't adding up. They suddenly appeared after Obama was elected, they seem to be devoted to destroying the "evils" of Liberalism, they throw around words like socialist and use holocaust metaphors without much care for the implications. They're heavily-sponsored by Fox News, and they often use highly-divisive speakers like Sarah Palin and Michele Bachmann. I'm thinking this whole thing is some kind of rebranding of the Republican Party and a few truly independent people are being swept along for the ride.

John from New Jersey writes:
Take them seriously. They are for real. They could be a problem for both parties, but especially the Democrats. Democrats, when you downplay this group of Americans, you are making a very very big mistake.

Carla from Alabama writes:
Are you kidding me? These people need their meds! At least until the mother ship comes back for them.

Gary from Michigan writes:
Just what this country needs at this time: another one-sided, ideologically-deluded group of self-serving extremists. Isn't having Republicans and Democrats enough obstruction?