How would repeal of 'don't ask, don't tell' affect military? 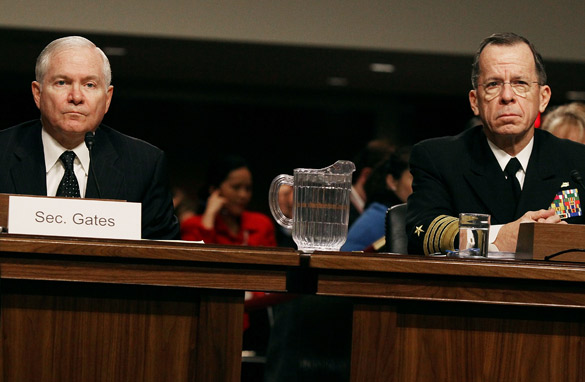 It could be the biggest shake-up to the military since the integration of the armed services under Pres. Truman back in 1948.

Pres. Obama is calling for a repeal of the controversial "don't ask, don't tell" policy - which bars gays from serving openly... and prevents the military from asking them about it. Congress would need to approve Pres. obama's request.

And just hours ago - the military's top uniformed officer appeared before Congress to support openly gay members serving. Chairman of the Joint Chiefs of Staff, Admiral Mike Mullen, says it's a matter of integrity and that it is wrong to force people to "lie about who they are in order to defend their fellow citizens."

The military is set to begin a year-long study into how "Don't Ask, Don't Tell" can be repealed without causing major problems in the service.

But Critics say it's a bad idea to change this policy while the U.S. is engaged in two wars and faces the ongoing threat of terrorism. Republican Sen. John McCain says he's quote "deeply disappointed"... and while the policy hasn't been ideal, it has been "effective."

Meanwhile - a poll from late 2008 suggests more than 80 percent of Americans believe openly gay people should be allowed to serve.

It's estimated that more than 13,000 people have been discharged from the military under "Don't Ask, Don't Tell" since it was implemented in 1993 - this includes dozens service members who can speak Arabic - a highly-prized skill with the U.S. fighting wars in the middle east.

Here’s my question to you: How would the repeal of "don't ask, don't tell" affect the military?

Loren from Chicago writes:
In the long run, it's not going to make a difference. Gays are tolerated in society at large for the most-part. And for all the macho posturing that can go on in the military, it is ultimately a brotherhood of belief in protecting our country. Some may question the inclusion, but ultimately, they will understand that the flag is the same.

Bill from Arizona writes:
Hello Jack. I don't believe that they should repeal the "don't ask, don't tell" policy in the military. I'm a former Sgt. in the Marine Corps and I have found that some, not all, use the uniform to hide behind. "Look at me, I'm a macho Marine" … when all the time they are gay. I don't want my grandsons sharing a foxhole with someone who is gay.

George writes:
I served 27 years in the Army and at that time would never support gays in the military. I believe that the public support of gays is much higher than it was back in 1993 when the ban was put in place. The stigma associated with being gay is not as big a problem with the men and women in uniform today as it was in the distant past.

Albert from Los Angeles writes:
Jack, Ending "don't ask, don't tell" will have the same impact as every other growing pain our nation has survived; positive! At first, only white landowning males could vote, and the road to today’s integrated combat force has been an uphill battle all the way, but every time our troops became more integrated, they became a stronger diplomatic symbol to the world of America’s commitment to defend the natural rights of mankind.

Ed from Georgia writes:
The real problem will be the homophobic bullies who will not confirm to social norms, not the gay service members who have spent their lives striving to conform.

Bruce from Washington writes:
Remember how the U.S. was worried about Harry Truman's integration of the military in the early '50s? There were all kinds of excuses. Still, we all survived. Now, we have another step to make so that our military can join the 21st century. Just do it! As a decorated veteran of Vietnam, I served with men I knew were gay, and I trusted them with my life.