How much do State of the Union speeches matter? 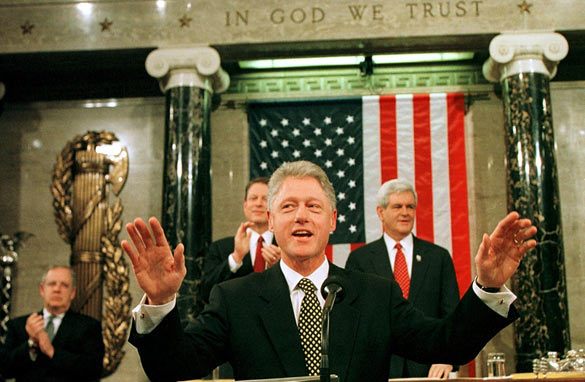 (FILE PHOTO) In his 1996 State of the Union speech, Bill Clinton promised that the era of big government was over - it wasn't. (PHOTO CREDIT: JOE MARQUETTE/AFP/Getty Images)

They are full of pomp and circumstance, lots of applause and plenty of media attention, but history proves that State of the Union speeches really don't matter all that much.

That's because generally speaking presidents come out and say the state of the union is strong - even if it's not - and a bunch of other stuff that isn't necessarily true.

For example, in 1934 FDR said: "Now that we are definitely in the process of recovery." Problem was, the economy was nowhere near recovering.

Then there was Richard Nixon - who in his 1974 State of the Union speech - promised the country no recession was coming. He also pledged to never resign and described the U.S. as the winner in the Vietnam war. Within months, Nixon quit, the country was in a recession and North Vietnam is still communist to this day.

In 1996 - Bill Clinton swore that "the era of big government is over" - turns out it wasn't. In Clinton's address to Congress the following year, he talked about how much stronger the country could be if it let the government get more involved in several areas.

Of course President Obama's speech tonight will get lots of media coverage, but polling suggests that a president's support is usually unaffected by the state of the union. A Gallup poll shows that among recent presidents, only Clinton seemed to get a bump in public opinion from his annual state of the union speeches.

Here’s my question to you: How much do State of the Union speeches really matter?

END_OF_DOCUMENT_TOKEN_TO_BE_REPLACED

U.S. may go bankrupt in the next decade. Why won't gov't do anything?

The United States could be bankrupt in 7 to 10 years, yet our government refuses to do anything about it.
[cnn-photo-caption image=http://i2.cdn.turner.com/cnn/2010/images/01/27/art.-dollar.jpg caption=""]
The Senate voted yesterday against a bipartisan commission that would make recommendations on to how to reduce the nation's skyrocketing deficits... estimated to top $1.35 trillion this year.

But the truth is: There are only two options for reducing our more than $12 trillion national debt: Either raise taxes or cut spending - or both. Washington is choosing to do neither.

Republican Lindsey Graham, who voted in favor of the commission, tells Politico he's disgusted with the Senate's lack of progress on much of anything:

Meanwhile President Obama is expected to set up a similar deficit reduction commission by executive order in his State of the Union address tonight. Noble - but in reality, it's just another empty political gesture that means nothing.

Unlike the proposed commission killed by the Senate, the president's commission won't be able to force Congress to do anything. In other words - it won't have any teeth.

Here’s my question to you: The U.S. may go bankrupt in the next 7 to 10 years. Why won't our government do anything about it?

END_OF_DOCUMENT_TOKEN_TO_BE_REPLACED

Has U.S. done enough to protect itself against a major terror attack?

With the hundreds of billions of dollars we have spent since 9/11, here is something to think about:

The United States is not prepared to protect itself against the threat of WMDs - at the same time al Qaeda seems intent on another large-scale attack.
[cnn-photo-caption image=http://i2.cdn.turner.com/cnn/2010/images/01/27/art.osama.jpg caption="(FILE PHOTO) In a recent radio address, Osama bin Laden praised the attempted Christmas Day bombing of a U.S.-bound airliner. He also warned of more attacks to come."]
A bipartisan commission appointed by Congress is giving the White house and Congress failing grades for not coming up with a rapid-response to deal with disease outbreaks from bio-terrorism... or providing enough oversight of security and intelligence agencies.

The chair of the panel says the U.S. no longer has "the luxury of a slow learning curve, when we know al Qaeda is interested in biological weapons."

Not very reassuring that this report comes on the heels of the failed attempt to blow up an airplane bound for Detroit on Christmas Day - after which President Obama acknowledged intelligence agencies didn't connect the dots.

And, Osama bin Laden is back, praising the attempted bombing. In a new audio recording, bid Laden says it was a heroic act meant to remind us of the 9/11 terror attacks. He warns that more attacks against the U.S. are coming.

Intelligence officials worry that al Qaeda in the Arabian Peninsula - which claimed responsibility for the Christmas bomb attempt - may have trained other suicide bombers.

Just last week, Britain elevated its terror threat level to "severe" - its second highest level. At the same time - American officials have described an "unusually high" number of people on the no-fly list trying to board planes bound for the U.S.

Here’s my question to you: Has the U.S. done enough to protect itself against another major terror attack?