Should Pelosi have to explain her trip to Copenhagen?

Hundreds of thousands of dollars.

That's how much it cost for a delegation of 59 people - led by House Speaker Nancy Pelosi along with members of Congress, staff and in some cases spouses and kids - to go to Copenhagen, site of the Climate Summit, just before Christmas.
[cnn-photo-caption image=http://i2.cdn.turner.com/cnn/2010/images/01/26/art.pelosi.copenhagen.jpg caption="House Speaker Pelosi attends a press conference at the Copenhagen Climate Summit."]
CBS News reports that for 21 Congressmen, food and rooms for two nights cost $4,400; and the Total hotel bill - including meeting rooms - was more than $400,000.

Pelosi used two military jets for herself and her party at a cost of more than $100,000 dollars in flight time.

Hundreds of thousands of dollars of taxpayer money. This has nothing to do with the Obama administration officials who went to Denmark to actually attend the summit.

Pelosi filed the required expense report - but so far has failed to explain why it was necessary for her and her colleagues to make the trip to Copenhagen in the first place. Her arrogance is absolutely breathtaking. As for the high hotel charges, Pelosi's office says those who stayed two nights were charged a six-night minimum at the five-star Marriott. Information that was probably available before Pelosi and the freeloaders made their vacation plans.

Note to the House Speaker: We have skyrocketing deficits and national debt in this country. The President is talking about reigning in discretionary spending. I wonder if that would have included this junket by Pelosi and her colleagues. I would be curious to know where Nancy Pelosi gets her sense of entitlement to simply blow hundreds of thousands of dollars of our money at Christmas time so she and her colleagues can take a little trip to Copenhagen.

END_OF_DOCUMENT_TOKEN_TO_BE_REPLACED

Health care reform better off with women in charge?

In a town hall type meeting this weekend here's what she said to the voters:
[cnn-photo-caption image=http://i2.cdn.turner.com/cnn/2009/images/11/24/flushot.jpg caption=""]
"We go to the ladies room, the Republican women and the Democratic women, and we just roll our eyes at what's being said out there. And the Republican women said when we were fighting over the health care bill, if we sent the men home we could get it done this week."

Shea-Porter added that she wasn't trying to "diss" the men in Congress, but that females understand how to care for relatives and that they could find "common ground there." The congresswoman suggests that Maine's two women senators - Olympia Snowe and Susan Collins - "work very well together."

Critics are slamming Shea-Porter, calling her comments "bizarre, sexist and arrogant" - along with "divisive, uninformed and totally embarrassing." They say opposition to health care has nothing to do with gender.

A group of Republican women members of Congress came out with a statement that the conversations this congresswoman "claims to be referencing have never taken place with any of us."

Never mind that. Now that the Democrats have lost their super-majority in the Senate, health care reform - which seemed within their reach just a few weeks ago - is now slipping away.

The Democrats are trying to figure out other ways - any way - to get the measure passed. Time to think outside the box.

Here’s my question to you: Would health care reform be better off with women in charge?

END_OF_DOCUMENT_TOKEN_TO_BE_REPLACED

What should Pres. Obama emphasize in his State of the Union address tomorrow? 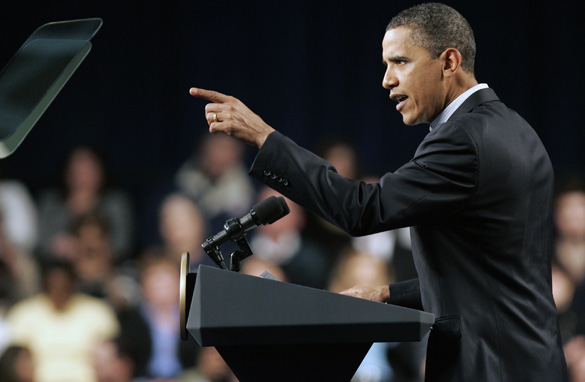 President Obama has the chance to use tomorrow's State of the Union address to reset his agenda and refocus the attention of the American people.

It's been a rough week for the president and his party - since the Democrats lost control of Ted Kennedy's Senate seat in Massachusetts. Without their filibuster-proof majority, the president's signature issue of health care reform is on life support.

And the public doesn't appear too disappointed about that. A new poll shows 70 percent of Americans think the Democrats' loss of their super-majority is a good thing.

Meanwhile the president is expected to announce a three-year freeze on all non-security federal discretionary spending. He claims this could save $250 billion over 10 years - which is a start, but still just a drop in the bucket considering the country's $12.5 trillion debt.

And, expect some liberals - you know, the president's base - to push back hard. Already critics on the left are calling the proposed spending freeze a mistake of historic proportions. Some compare Mr. Obama to Republican Herbert Hoover, who failed to pull the U.S. out of the great depression.

Others liken this to Democrat FDR's move to cut back on government spending in 1937 - the economy tanked and so did the Democrats in the following midterm election.

There's lots more on the president's plate too, like the jobs situation - which doesn't show many signs of turning around. Unemployment is at 10 percent… up from seven percent when Mr. Obama took office.

Here’s my question to you: What should Pres. Obama emphasize in his State of the Union address tomorrow?

END_OF_DOCUMENT_TOKEN_TO_BE_REPLACED

Cafferty on stimulus and jobs