Should Congress give up trying to pass health care?

A majority of Americans want Congress to put the brakes on health care reform.
[cnn-photo-caption image=http://i2.cdn.turner.com/cnn/2010/images/01/22/art.nurse.jpg caption=""]
A new USA Today/Gallup Poll shows 55 percent of those surveyed say lawmakers should suspend work on the current health care bills and consider alternatives. Only 39 percent say they want Congress to try to pass the current bill.

Meanwhile, President Obama is vowing to press ahead - even though he acknowledges health care reform has "run into a bit of a buzz saw." Party leaders like Harry Reid and Nancy Pelosi insist health care will move forward - but other lawmakers, much like the American public, are losing their appetite for fast action.

Connecticut Democratic Senator Chris Dodd says his colleagues should "maybe take a breather for a month, six weeks" to regroup after the loss in Massachusetts.

There's no question this week's election has made the road to health care reform more difficult. Pelosi has ruled out what was the preferred option for some Democrats - the House passing the Senate bill as is. She doesn't have the votes.

And, although there's a sense that a scaled-back health care bill might be the best route for Congress to take - even that might be easier said than done with the current political winds blowing across Washington.

Here’s my question to you: Should Congress give up trying to pass health care?

END_OF_DOCUMENT_TOKEN_TO_BE_REPLACED

Meaning of only U.S. liberal radio network shutting down?

Air America has crashed. The liberal talk radio network is going out of business.

The network that once boasted hosts like Al Franken and Rachel Maddow launched in 2004 during the Bush administration. It was meant as a liberal alternative to right-wing commentators like Rush Limbaugh and Sean Hannity.
[cnn-photo-caption image=http://i2.cdn.turner.com/cnn/2010/images/01/22/art.air.america.jpg caption=""]
But Air America struggled from the beginning - with several management shake-ups, a bankruptcy, followed by a $4 million sale.

The network described itself as "the only full-time progressive voice in the mainstream broadcast media world" when it launched... saying it offered dissenting views on things like the Iraq War - when such positions were called un-American.

But nearly six years later - and 1 year after the inauguration of Democratic President Barack Obama - Air America says it will file for Chapter 7 bankruptcy – ending programming for good on Monday. The network cites the "very difficult economic environment," pointing to a steep decline in radio ad revenues.

Conservatives suggest the "passing" of Air America is a reminder that the country is center right. After all - tough economy or not, Limbaugh still draws in 10 to 20 million listeners each week.

Meanwhile a recent Gallup Poll shows that conservatives finished 2009 as the number one ideological group in the U.S. for the first time in five years. 40 percent of Americans identify as conservatives, compared to 36 percent for moderates and just 21 percent for liberals.

Here’s my question to you: What does it mean that the country's only liberal radio network is going out of business?

END_OF_DOCUMENT_TOKEN_TO_BE_REPLACED

Have your views of Obama changed during 1st year? 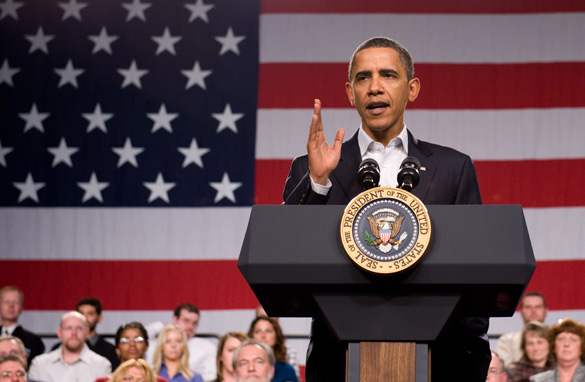 As President Obama marks his first anniversary in the White House and the State of the Union approaches, there's criticism coming at him from all corners.

New York Times columnist Paul Krugman writes that doubts he had about the president - since the primaries - have been realized... including that Mr. Obama may not be ready to fight for what his supporters want.

In a piece called "he wasn't the one we've been waiting for," Krugman describes the president talking about health care... saying lawmakers should "try to move quickly to coalesce" around elements of the bill that people agree on. Krugman mocks the message - saying it's like the president is telling lawmakers to "run away."

And when Press Secretary Robert Gibbs was asked about Krugman's critique - he ducked the question.

Meanwhile from the right, Pat Buchanan suggests that white voters are one group that might be of particular concern to the president.

In a column called "Has Obama lost white America?"... Buchanan explains how the racial breakdown of the vote in recent elections in Massachusetts, New Jersey and Virginia could spell trouble for the president.

In 2008 - Mr. Obama took a larger share of the white vote - 44 percent - than John Kerry or Al Gore had done before him. But since then - Republicans have won these three major races because there were more white voters; and Republicans swept that vote in "Reagan-like landslides."

Here’s my question to you: How have your views of President Obama changed during his first year in office?

END_OF_DOCUMENT_TOKEN_TO_BE_REPLACED

Cafferty on a third U.S. party