How should Democrats proceed on health care?

The Republicans' victory in Massachusetts could very well be the final nail in the coffin for the Democrats' health care reform.
[cnn-photo-caption image=http://i2.cdn.turner.com/cnn/2009/images/11/24/flushot.jpg caption=""]
Exit poll data from one Republican firm shows the health care bill was the single most important issue to Massachusetts voters. This poll found 52 percent of those surveyed are opposed to health care reform; and 42 percent say they cast their ballot to help stop the overhaul.

Without the 60 vote filibuster-proof majority in the Senate, the Democrats are left with a few options - none of them all that good... and most involving complicated legislative procedures.

The house could pass the bill that cleared the Senate as is - but several House Democrats are suggesting they won't go for that.

The House could also pass the current Senate bill and then try to fix it with a procedure that only needs 51 votes to pass the Senate.

Or the Democrats could scrap what they have and just try to pass a bare-bones bill that includes some of the most popular initiatives.

Several senators - including democrat Jim Webb - are calling for health care reform to be suspended until Scott Brown is sworn in.

And it appears President Obama may be getting the message... he says that the Senate shouldn't jam health care through before Brown is seated: "People in Massachusetts spoke. He's got to be part of that process."

Here's my question to you: How should the Democrats proceed on health care now that they no longer have the votes to pass it in the Senate?

END_OF_DOCUMENT_TOKEN_TO_BE_REPLACED

What should happen to hundreds of thousands of Haitian orphans?

At the end of the day, there will be an overwhelming number of orphans in Haiti in the aftermath of last week's earthquake.
[cnn-photo-caption image=http://i2.cdn.turner.com/cnn/2010/images/01/20/art.haiti.orphan.jpg caption="A woman holds an orphaned infant at a Port-au-Prince orphanage."]
Even before the deadly quake, it was estimated Haiti - one of the world's poorest countries - had 380,000 orphans; children who have lost one or both parents.

Some had lost their mothers or fathers in previous disasters, like deadly storms and hurricanes. Others were abandoned during Haiti's political turmoil.

And aid groups estimate the number could climb well up into the hundreds of thousands, with UNICEF warning the scale of the crisis has reached "unbearable proportions."

Many countries are trying to help pick up the pieces. The U.S. has announced a humanitarian policy that will allow some Haitian orphans into the country temporarily. Dozens of these children have already arrived in Pittsburgh.

The government is also trying to speed up hundreds of Haitian adoptions that were already in progress; and the Catholic Church is trying to bring thousands of these kids into the U.S. permanently.

Other children are being adopted by Dutch families - or brought to group homes in the neighboring Dominican Republic.

But some experts worry that some children may be shipped overseas or adopted before it's clear whether they still have extended family members alive in Haiti. There's a concern that this time of chaos could lead to fraud, abuse and trafficking of children.

Although the tragedies and heartbreak coming out of Haiti have no limits - it seems entirely possible that the youngest and the most vulnerable in that society are among the hardest hit.

Here’s my question to you: What should happen to the hundreds of thousands of Haitian orphans?

END_OF_DOCUMENT_TOKEN_TO_BE_REPLACED

What does Republican victory in Mass. mean for Obama's first term? 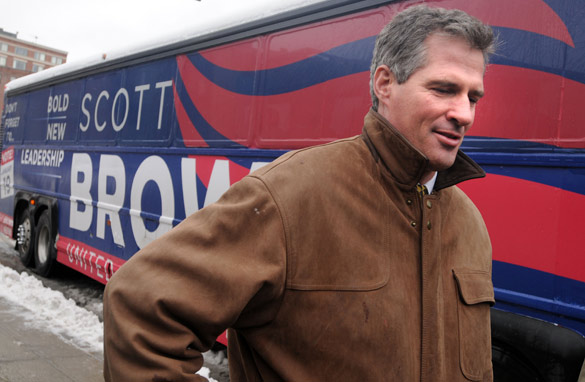 What a difference a year makes.

A year ago to the day - President Obama rode into Washington high on his campaign's mantra of change and hope. He delivered his inauguration speech to adoring masses and embarked on an ambitious agenda - planning to tackle the economy, health care, the environment... all in his first year.

Fast forward 12 months - and the president and his party have been handed a stunning defeat - in Massachusetts of all states.

What's more, it's the same angry independent voters disgusted with politics as usual - who had vaulted President Obama to the White House - that delivered big time for Republican Scott Brown in mass.

Meanwhile the president's comment that "we can't win them all" is tantamount to putting lipstick on a pig. This loss is huge for him and for the Democrats. After all, President Obama campaigned personally for the loser, Martha Coakley, in Massachusetts as he did for the Democrats who lost governors' races in Virginia and New Jersey. Seems like the "Obama magic" is no more.

No doubt Republicans are rejoicing here, with potential presidential hopefuls like Mitt Romney and Tim Pawlenty weighing in on what it all means. One thing is sure... they're all smiling.

But Sarah Palin might want to think twice before she gives up her day job over there at the F-word network. A new CBS news poll shows a whopping 71 percent of Americans - including 56 percent of Republicans - are against Palin running for president in 2012.

Here’s my question to you: What does a Republican victory in the bluest of blue states mean for the rest of President Obama's first, and perhaps only, term?