President Obama said over and over during the campaign that cameras would be allowed to cover the health care negotiations. He lied. No cameras permitted at the secret talks to reconcile the Senate and House versions of health care reform. And for good reason.
[cnn-photo-caption image=http://i2.cdn.turner.com/cnn/2010/images/01/19/surg.jpg caption=""]
The White House and Congressional Democrats have cut a deal with union leaders to limit the reach of a tax on high-end health insurance plans. Health plans covered by union contracts will be exempt from the 40-percent tax until 2018... $60 billion worth of exempt.

Taxing so-called "Cadillac" plans was supposed to be one of the ways to pay for this massive overhaul - but under this deal, taxes will only raise $90 billion instead of the expected $150 billion over 10 years.

Union leaders were at the negotiating table for three days... while of course cameras weren't.

President Obama and the Democrats are digging their graves here - with what critics are calling a "sweetheart deal."

This is nothing but naked politics... union leaders had warned earlier that Democrats could lose their support if the final health care bill included a tax on Cadillac Plans. So the leadership paid them off to the tune of $60 billion. All done out of sight of the news media and the public.

Here’s my question to you: Are you surprised unions were invited into secret health care negotiations?

END_OF_DOCUMENT_TOKEN_TO_BE_REPLACED

Should U.S. let Haitians in as refugees? 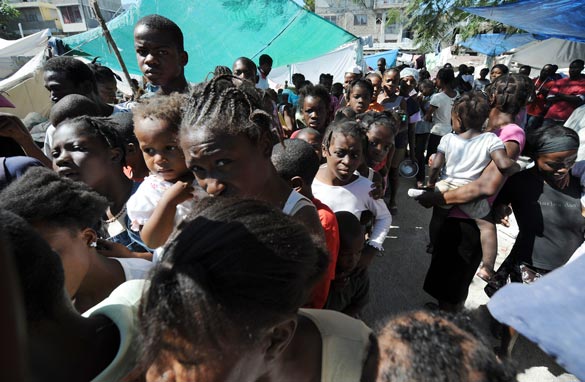 The United States is telling millions of Haitians - made homeless by last week's earthquake - not to try to come here.

Homeland Security and the Defense Department say they're taking strict actions to avoid a mass exodus from Haiti... with concerns that it could lead to a refugee crisis in places like Miami or deaths at sea.

A U.S. Air Force cargo plane flies for hours over Haiti daily... broadcasting a message from Haiti's ambassador to the U.S. that things will be even worse if they attempt the trip… and that any refugees will be sent right back to Haiti.

Officials plan to take any boats with Haitians caught at sea to Guantanamo Bay, Cuba - and they're clearing out a federal jail in Miami to make room for Haitians who might make it here.

It doesn't appear that Haitians have been trying to flee the island by boat, yet... but officials worry that as conditions on the ground get worse, the chances of an exodus could go up.

Since the earthquake, the U.S. has only allowed 23 Haitians into the country to get medical help on humanitarian grounds... as well as allowing some Haitian orphans to come here temporarily.

The U.S. says it will give temporary amnesty for 18 months to Haitians who were in the country illegally before the earthquake. But the so-called "temporary protected status" - which could affect as many as 200,000 Haitians in the U.S. - won't apply to those who try to get into the country going forward.

Here’s my question to you: Should the U.S. bend immigration rules and let Haitians into the country as refugees?

END_OF_DOCUMENT_TOKEN_TO_BE_REPLACED

How would Dems explain loss of Kennedy's Mass. Senate seat?

What once seemed unthinkable might just become reality: Democrats are in jeopardy of losing the Massachusetts Senate seat held by the late Ted Kennedy for almost five decades.
[cnn-photo-caption image=http://i2.cdn.turner.com/cnn/2010/images/01/19/art.t.kennedy.jpg caption="Sen. Ted Kennedy (D-Mass.) lost his battle with cancer last year."]
It took just about a week for the Democratic candidate and state attorney general, Martha Coakley, to implode... Several polls released in the last few days show Coakley now trailing Republican Scott Brown - by as many as nine points. Coakley led Brown - who was unknown and underfunded - by more than 30 points back in November.

Advisers to President Obama say privately they believe Coakley will lose the special election... they've apparently grown increasingly pessimistic about her chances after a series of missteps.

Some analysts suggest that in some ways the Republicans have already won - by forcing the Democrats to invest the time and money in a race for Kennedy's old seat. The Democrats brought out their big guns in Massachusetts - including President Obama and former President Bill Clinton, but it may not be enough.

This being politics - you can bet the Democrats are already trying to figure out where to lay the blame for a potential loss. Chances are they would paint Coakley as a terrible candidate... who ran a poor campaign.

But it's clear The stakes couldn't be much higher: A defeat for the Democrats could destroy the president's attempts to push through his legislative agenda, especially health care. And - it would send a strong message to Democrats up for re-election around the country in November.

Here’s my question to you: How would Democrats explain a loss of Ted Kennedy's Massachusetts Senate seat?